The Atomic Pinball Clock was built long before there was any notion of building an exhibit.  It was more of an exercise to learn how to use the popular Arduino microcontroller to put the orphaned backbox of a pinball machine back to good use.  The design challenge was to use the existing sockets on the backbox, where the original pinball machine cabinet would have plugged in to the backbox, to manipulate the score reels and other available hardware to show the current time.  The changes were meant to be reversible so that if an orphaned cabinet is ever found the added hardware could be removed and the backbox should still work in a pinball machine. An additional self imposed constraint was that the clock would need to be self setting so that it would not require being set to the right time when turned on nor batteries to keep the time when turned off.

The solution was to include a receiver for the WWVB time broadcast similar to those used by self setting clocks everywhere.  The top level design has the Arduino board constantly monitoring the WWVB broadcast, decoding the current time, adjusting for the time zone (which is not included in the broadcast), converting the time to a sequence of pulses that change the score reels to the correct value, converting the pulses to the correct voltage and driving them in through the sockets at the bottom of the cabinet.  In the end one modification was made to the original backbox wiring to add individual control to the chime so that it wouldn't chime each time the 1s score reel advanced.  This modification also allows the clock to chime the hour at the top of each hour.

The original backglass for the backbox was in poor condition so it was scanned and cleaned up on the computer.  The original design was faithfully restored except for a small modification to obscure the unnecessary 5th digit.  The cleaned, revised version was printed on a sheet of plastic by a commercial printer. 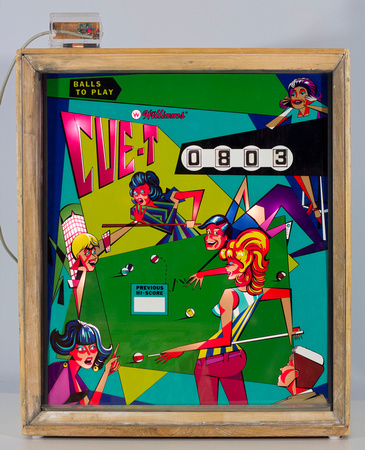 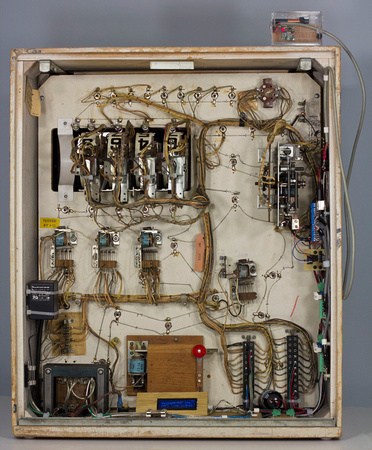 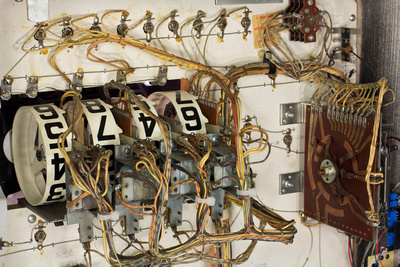 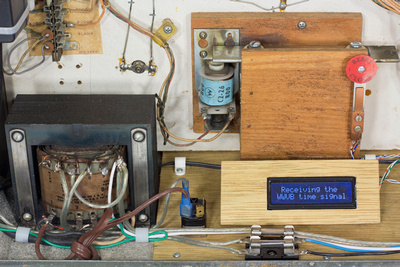 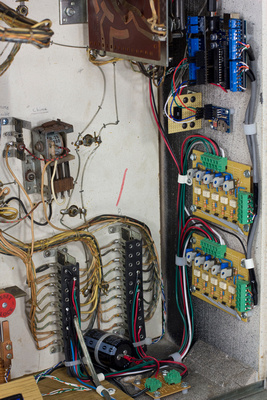 When shown in public this poster explains the basic operation of the WWVB broadcast and the clock's design. 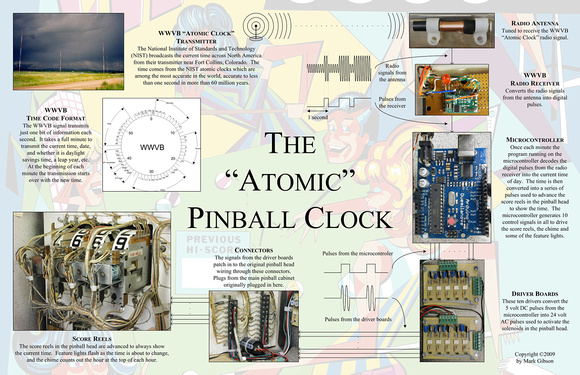 The complete story of building the Atomic Pinball Clock with more photos is on the next page.

The Atomic Pinball Clock has appeared at many public events.  At one Maker Faire a gentleman spent what seemed to be an unusual amount of time studying the clock, reading the information card and generally observing its behavior.  Eventually he approached me and struck up a conversation about the clock.  He turned out to be the Chief Engineer for WWVB.

He returned another day as the Faire was just opening.  I had turned on the clock that morning but it wasn't able to set the time.  I lamented to him that the clock must have developed an issue or that perhaps there was some new interference to the radio signal it relies on.  He sheepishly confessed that it wasn't the clock but WWVB itself that had the issue.  He had been in touch with them and was aware of the problem.  A short while later he stopped by again to tell me that they had sorted out the problem and would be back online soon.  A few minutes later the clock locked onto the radio signal, completed its reset sequence, set the time and ran successfully for the rest of the show.