These pages are a photographic documentary of this mechanical game and the amazing devices hidden inside that make it all work. 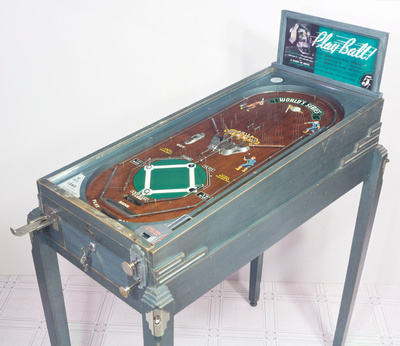 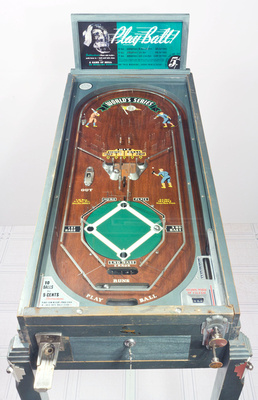 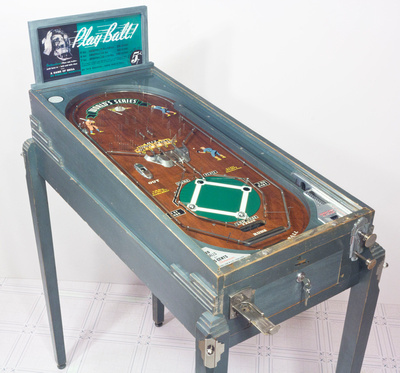 World's Series invites the player to play one half inning of baseball (3 outs).  The player tries to land balls in the Hit runway after launching them all the way around the playfield.  Balls might also land in Ball, Strike or Out pockets.  The player's view of the green baseball diamond is from the perspective of the center field stands where 2nd base is closest to the player and home plate is further away. 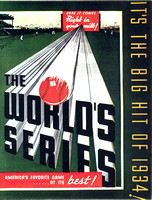 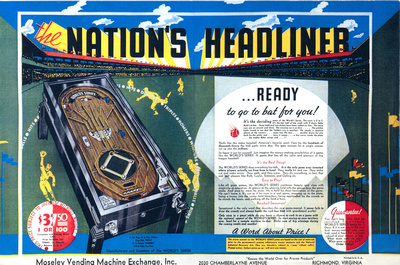 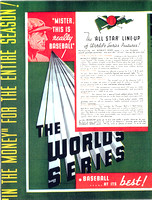 World's Series was introduced by the Rock-Ola Manufacturing Corporation in May of 1934 during a time of great innovation in the coin operated amusement industry. Through the early 1930s games were mechanical, relying on just gravity, springs and levers to propel the ball around the playfield.  Electrical devices such as solenoids and lights were introduced in 1933 to kick the ball and illuminate the game and were quickly adopted to add more features and flash to the games.

The World's Series introduction was near the end of the purely mechanical era of game development and represents some of the most innovative and complex mechanical game design.  Over 50,000 copies were produced which is more than double the number of games produced of any modern title. 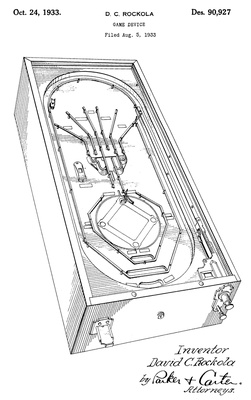 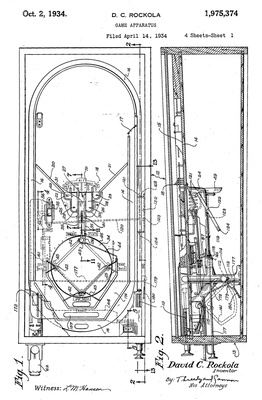 Inventor David C. Rockola filed at least two patents to protect his World's Series innovations. The first, USD90927S, is a just brief claim for the ornamental design of the game cabinet and playfield.  The design shown in the figure above differs slightly from the production version.  Most notable are the guide rails in the upper playfield that were replaced with simple pins in production. Other differences include the guides where the ball enters the turntable, the shooter gauge and cabinet ornamentation.

The second patent, US1975374A, covers in great detail the mechanisms and how they work.  Some of the figures from the patent are included on subsequent pages. 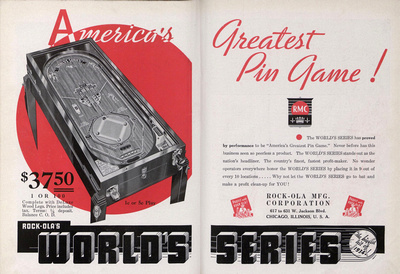 All of these features are accomplished without electricity.  The mechanisms are driven by gravity and spring tension cleverly refreshed as the player plays the game. 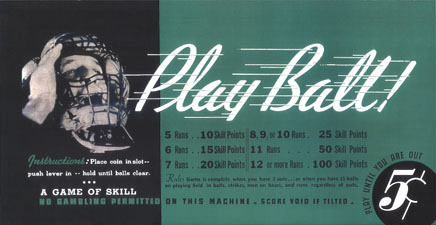 I acquired a disassembled World's Series game from Nathan of Buckwerks.com, a friend, enthusiast and supplier of Rock-ola pinball games and parts.  On the following pages are hundreds of detailed photos and videos that document the game reassembly to help those facing similar restorations or to entertain anyone else who is curious.  There are also explanations of how the parts work to illustrate the design ingenuity that went into them. My motivation in this restoration is not to return the game to as new or better than new condition.  Instead my intention is to preserve what's there, improve what can reasonably be improved but retain the original condition and character of a well used antique.

Although the photos are grouped into rough sequences they are not meant to represent a specific order of assembly. Having never worked on a World's Series before and having no instructions this process was an exercise in amusement archaeology and subject to plenty of trial and error. Occasionally things had to be removed and reinstalled in a different order.  Let that be an indication that this is not meant to be the definitive World's Series assembly guide.  It's just a log of my process of trail and error.

This video highlights many of the game features and game play of the finished game.

And this video shows how mechanisms inside the game work as the game is being played.  If you're curious about the details of how the game mechanisms work and how all the pieces fit together continue on to the pages below that document putting the game together piece by piece.  References to parts on subsequent pages include the original part numbers as documented at the end of the the Parts List page.

I've tried to be careful in recording the details of reassembling this game.  But mistakes happen, parts may have been swapped before or there may have been variations during manufacturing.  These details reflect just one game in the thousands that were made. If you do find errors in the following pages please let me know through the Contact page and send whatever specific information you may have.

This page is just the World's Series overview.  There are many more photos, videos and details on the following pages: