Click on any thumbnail to jump to the details section for that device.

Find Basic assemblies and Steppers on the previous page.

These are more elaborate assemblies that help define and control the behavior of the pinball machine.

The Score Motor is the heartbeat of the pinball machine.  It rotates periodically during the game when sequences of events need to happen in a specific order.  As the motor turns cams open and close switches in a specific, repeatable order similar to the way the drum in a music box plucks the fingers that play the tune.

The first time the Score Motor runs is when a new game starts.  All the features need to be reset, score reels returned to zero and the first ball kicked out to the shooter lane.  During the game the Score Motor might run to score 50 points (advancing the 10s score reel five times) when a single switch closes for example.

This score motor is from a D. Gottlieb & Co. pinball machine and is wired to a set of score reels to show how scoring five points might work: 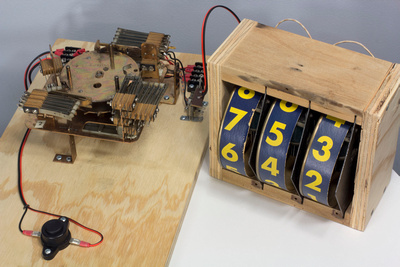 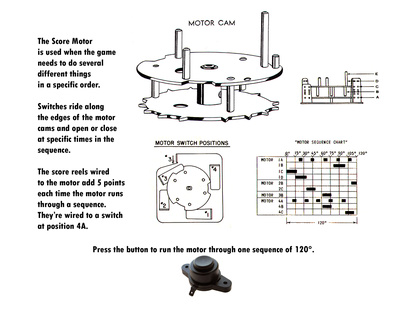 This score motor is from a pinball machine made by Williams Electronic Manufacturing Company and uses a set of cams but no pins to operate the switches.  A switch from each cam is used to light one of the bulbs in front to show the timing of the various cams. 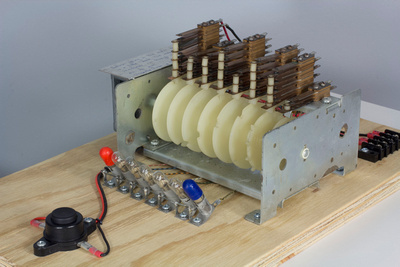 Find patent information about score motors on the Patents page.

Most pinball machines make sounds of one sort or another.  Electromechanical games used chimes, bells and knockers.  Chimes and bells of different tones were used for different point values (e.g. 10 point chime, 100 point chime, etc.) while the knocker was typically used when a free game or special was awarded. 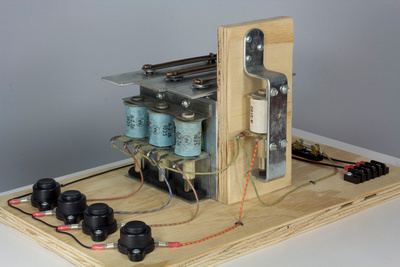 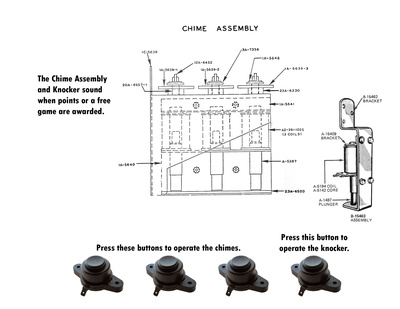 A set of chimes and a knocker are demonstrated in the following video.  (An example of a bell can be seen in the video for the captive ball unit below.)  In the chimes, solenoids are mounted below a set bars of different lengths similar to the bars in a xylophone and the plungers strike the bars when the solenoids are activated.  The knocker works the same way, but the plunger strikes a plate typically mounted to the pinball machine cabinet which makes the entire cabinet a sort of resonant chamber.

Note that the motion of the plungers is the same as shown in the video for the solenoid, just much faster.

More detail and animations explaining how chimes generate different pitches is on the Chimes, Vibrations and Pitches page.

Most early pinball machines required the player to manually lift the ball from inside the cabinet into the shooter lane where it would be shot onto the playfield with the plunger.  In the 1960s the ball lift was replaced by an automated kicker powered with a solenoid. 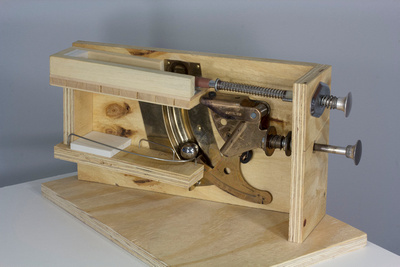 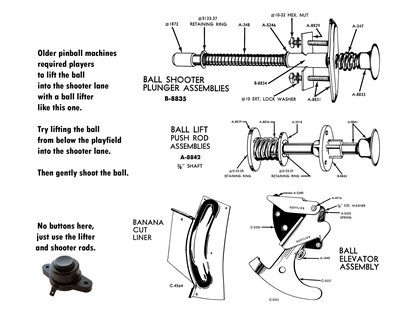 When the lower plunger is pushed in, a lever swings up that carries the ball above the playfield and into the shooter lane as shown in the following video.  In this demonstration the ball falls below the playfield as soon as it is launched.  In a real pinball machine the ball would be routed back to the ball lift from the drain between the flippers and from any other hole where the player might lose the pinball.

The electric ball lift helped to prevent cheating by limiting the number of balls the player could play at a time.  Bingo pinball machines often allowed players to add extra coins to improve their odds of winning.  The electric ball lift also helped insure that coins were added at the right time, after the first ball was lifted. 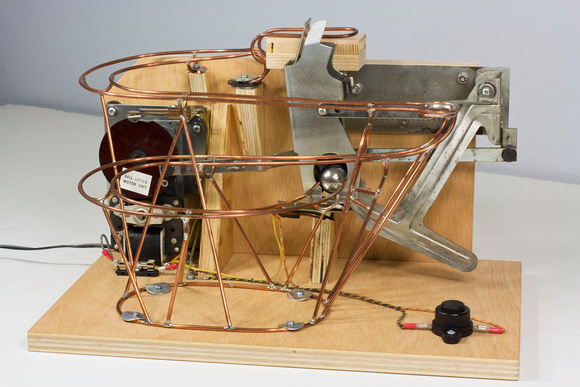 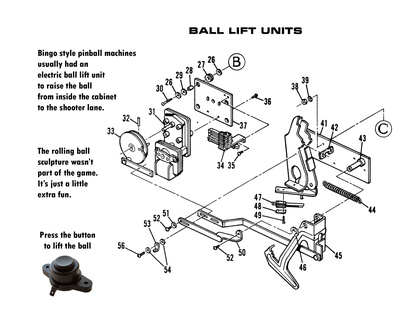 This electric ball lift is mounted behind a whimsical rolling ball sculpture that wouldn't have been part of any game.  It's just a fun way to guide the ball from the top of the lift to the bottom.  The following video gives a better idea how the lift works.

Large electromagnets like this were used in some games to change the path of the ball without touching it from below the playfield.  Electromagnets have no effect unless they're powered so turning them on and off can have interesting effects. 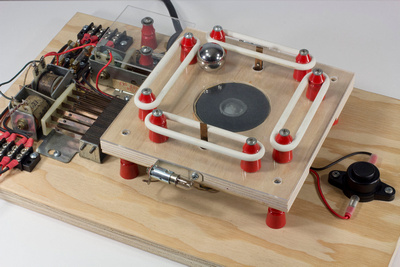 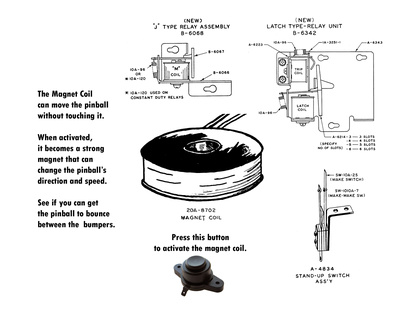 For a more in depth explanation of why the ball in the video behaves as it does, visit the Electromagnets and Acceleration page or see the original patent on the Patents page.

The Disappearing Post, or Up Post, is an obstacle that would appear and disappear periodically during a game.  Typically it was installed between the flippers and could prevent the ball from draining between them when in the up position. 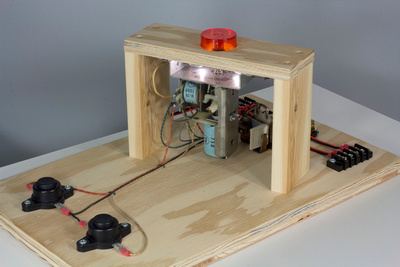 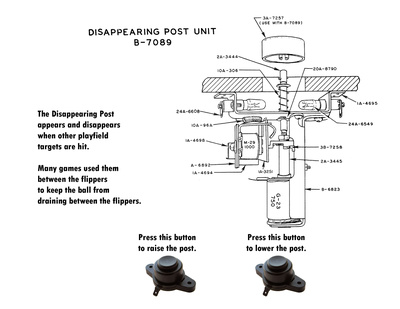 Find patent information about the Disappearing Post on the Patents page.

Targets are some of the playfield objectives the player has to hit with the pinball during the game.

A Drop Target disappears into a slot in the playfield when hit by the ball.  After points are scored, the solenoid below the playfield resets the drop target to its starting position. 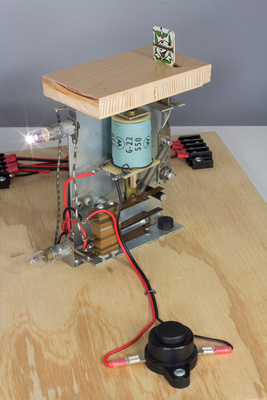 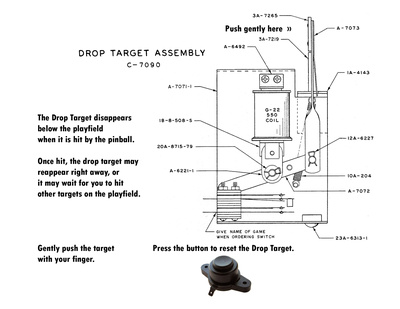 The drop target is held in the up position by a notch on its shaft that rests on a small ledge just below the playfield.  When struck by the ball (or by a finger in the following video) the target is pushed back and falls off the ledge, pulled down by the outstretched spring.  When the solenoid is activated, it pulls the target back up, stretches out the spring again and props the drop target notch back up on the ledge.

Find patent information about drop targets on the Patents page.

The spring loaded Vari Target registers how hard it was hit by the ball.  A soft hit only pushes it back a little bit while a harder hit will push it back further.  The points awarded vary according to how far back the Vari Target was pushed.

Once the points have been scored, the relay fires to reset the Vari Target to its starting position. 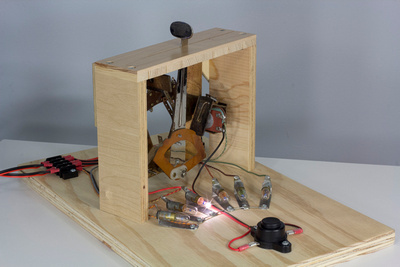 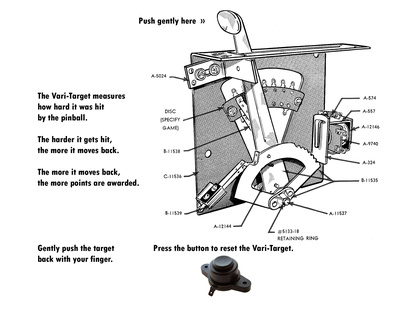 The video below demonstrates how the Vari Target works.  The armature on the relay acts like a ratchet to let the target swing back and hold it at its last position.  Switch blades attached to the back of the target arm connect an upper and lower contact together to complete a different circuit for each position.  In this board, each circuit lights a bulb to show how far back the Vari Target was pushed.

Find patent information about the Vari Target on the Patents page.

A Roto Target only presents three targets at a time above the playfield, but during the game the wheel spins periodically to expose a different set of three targets.  Regardless of its position, the Roto Target can tell which of the targets was hit (1, 2 or 3) and award points accordingly.  It does this with a set of rotating contact switches on the back of the roto target similar to those shown in the video for the stepper. 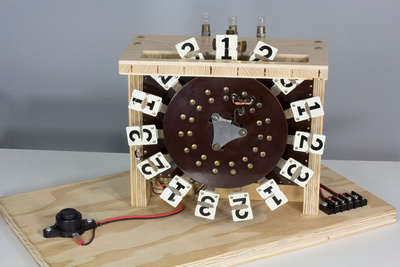 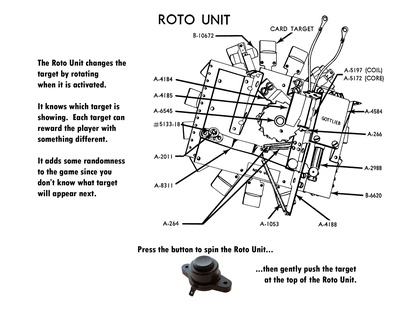 The Roto target uses a double ratcheting mechanism to spin in one direction, then roll back a bit in the other direction to center the target as the spinning stops.  This mechanism is shown in the video below.

Toys are often incorporated into the playfields and backboxes of pinball machines to entice and entertain.  Players don't usually much control over these devices but they do offer a chance to win more points or specials of various sorts, and they're fun to watch.

The Captive Ball Unit was a feature in the backbox of a few games in the mid 1960s (e.g. Pot 'O' Gold, Casanova and Apollo).  It would fire a ball vertically through a pachinko-like maze and award points based on which lane the ball ultimately fell through.  The player had no control over the ball in the captive ball unit.  It was just a fun diversion from what was going on on the playfield. 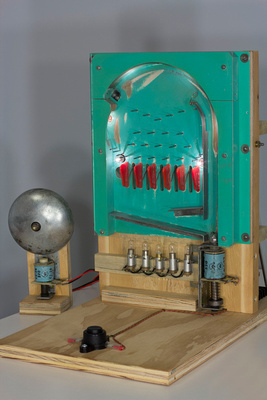 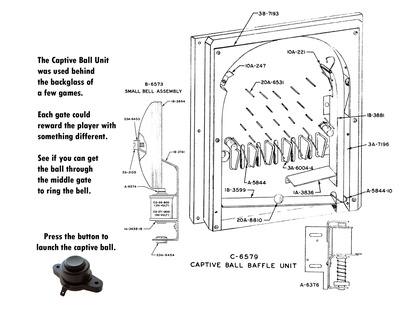 The lights near the bottom were added to highlight which lane the ball falls through as was the bell that rings when the ball drains through the middle lane.

The Doodle Bug assembly is a captive ball mechanism that appeared below a window in the playfield of just three games (Doodle Bug, Dipsy Doodle and Love Bug) in the early 1970s.  The captive ball travels back and forth through a track awarding the player with points for each pass. The player could activate the mechanism by hitting the appropriate playfield objectives but had no control over its operation. 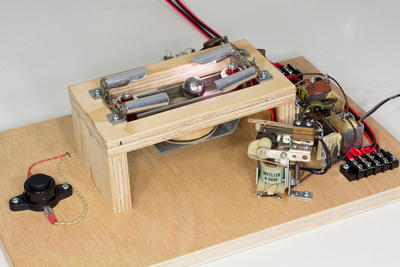 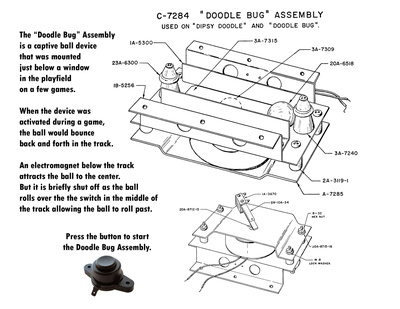 This assembly has been configured to operate a bit slower than it would have in the game to give you a better view of what's happening.  A small stepper unit on the right side was added to flash the lights on the end of the track back and forth as the ball passes.  On the left side a pair  of motor driven cams control the assembly's operation.  The top cam keeps the demonstration running for a short period while the bottom cam provides a minimum time between demonstrations.  The cams effectively limit the duty cycle to prevent the electromagnet from overheating.

The Spinner Unit is another captive ball mechanism that appeared first in A-Go-Go in 1966 and in several other games through the early 1970s.  When activated by hitting other objectives on the playfield, the Spinner Unit briefly spins a platter like a roulette wheel and awards the player based on where the ball comes to rest. 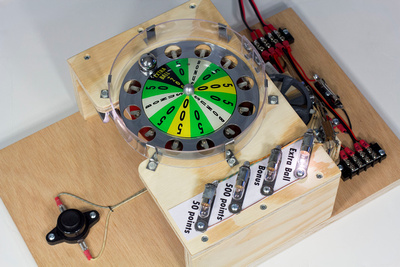 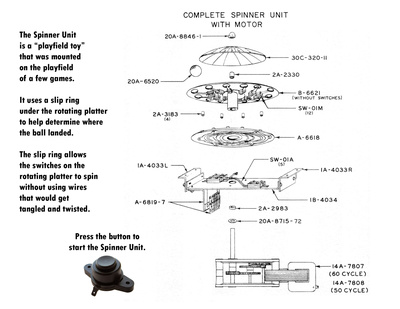 The platter of the Spinner Unit is driven by a motor like those used in score motors.  Each hole in the platter has a switch that closes when the ball lands in the hole.  The underside of the spinning platter has several concentric rings which connect to switch contacts that are fixed to the base.  Together the rings and contacts form a slip ring that allows the switches on the spinning platter to be used in the scoring circuit without any wires to get twisted or tangled.

The grey spoked wheels at the back of this board are cams driven by a small motor that are used to control the demonstration.  The top cam turns on the platter motor for short period while the bottom cam disables the black start button to allow the demo to proceed uninterrupted for a short time.

Find Basic assemblies and Steppers on the previous page.