Gottlieb's 1975 Atlantis pinball machine has a unique drop target scoring feature not found in other games.  On the left side of the playfield is a bank of ten drop targets.  The targets are arranged in five pairs with each pair consisting of one white and one blue target.  Typically on a drop target game when two targets are hit at the same time points are awarded for one target only because the game can't distinguish between one and two targets falling at the same time.

Designer Jeff Brenner added a simple yet elegant circuit to the game that awards 500 points when a single drop target is hit, but 5000 points when two neighboring drop targets fall together.  Here is a simplified version of the circuit: 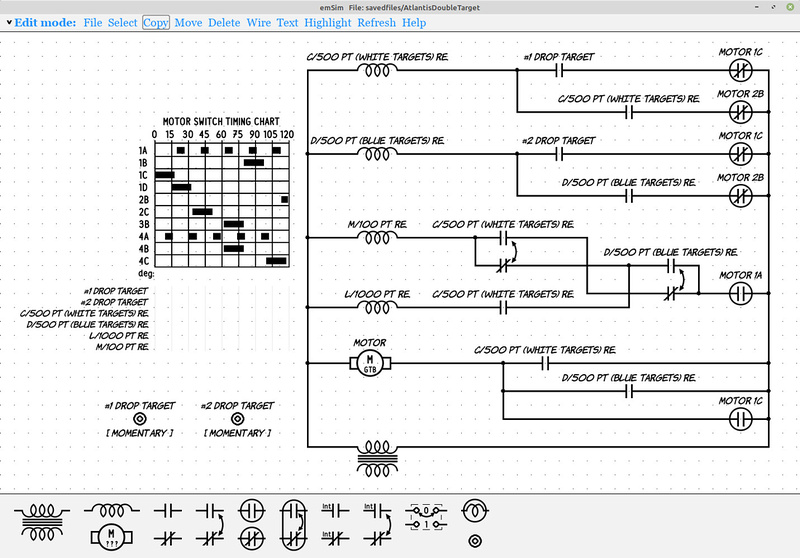 In this simplified schematic diagram just one white (#1) and one blue (#2) drop targets are shown below the score motor sequence chart.  Each of those drop targets activates a switch in the schematic.

At the top of the schematic is the C relay coil, or 500 Point relay coil for White Targets.  It is activated by a switch on the #1 (White) Drop Target and remains active until the Score Motor 2B switch opens at the end of the Score Motor cycle.  This is a standard Lock In circuit topology which is essentially the same as the 50 Point relay in the 50 Point circuit example.

Below the C relay coil is the D relay coil which is identical except that it is triggered by the #2 (Blue) Drop Target.

Near the bottom of the schematic is the Score Motor which starts turning when either the C or D relays fire (and close their respective normally open switches) and continues turning until the next index position is reached and the Motor 1C switch opens.

In the middle of the schematic diagram are the M (or 100 Point) and L (or 1000 Point) relay coils.  When these relays fire points are added to the Score Reels and Chimes sound although these are not shown here.

This animation shows how the circuit behaves when a single white (#1) drop target is hit.  Notice that the drop target switch is closed only briefly at the start of the simulation as the target drops below the playfield.

When a single white (#1) drop target is hit and its switch closes briefly the C relay fires and is held on after the drop target switch opens by its Lock In circuit.  When the C relay fires it closes a switch that sends power to the Score Motor which causes it to start turning.  As the Score Motor turns it closes the Motor 1A switch five times which fires the M or 100 Point relay five times which in turn adds 500 points to the Score Reels.

The scoring when a single blue (#2) drop target  is hit is nearly identical except that the path through the two Make/Break switches is reversed:

When two adjacent drop targets (one white, one blue) are hit both the C (white target) and D (blue target) relays activate which blocks the paths through both Make/Break switches.  Instead pulses from the Motor 1A are routed to the L or 1000 point relay through a third path shown here:

The path from the Motor 1A switch to the M or 100 Point relay coil uses a pair of Make/Break switches in a configuration that provides an Exclusive Or (or XOR) logic function. In other words the path is valid only if the C relay or the D relay is active but not if both are active.

Note that this circuit assumes that if a second target drops that it will happen before the Score Motor closes the Motor 1A switch for the first time.  If a single drop target is hit (which starts the Score Motor) and a while later a second drop target is hit the Motor 1A pulses might change from scoring 100 points to 1000 points each.  The playfield layout makes this unlikely though since the targets are in the upper part of the playfield. The time it would take for the player to take two shots to hit two drop targets is usually longer than the time it takes for the Score Motor to run through a cycle and score 500 points.

The circuit doesn't really know which two targets were hit, only that one white and one blue target were hit.  You could in theory get 5000 points for hitting a white and blue target that aren't next to each other but that too would be very unlikely before the Score Motor runs through its cycle.

Those with access to an open game might try to hit a single drop target and then hit a second drop target while points are scoring.  Chances are that the scoring would change from 100 to 1000 point scoring pulses after the second target drops.

Not shown in this schematic are the many playfield rollover switches which also fire the C relay and score 500 points.  The circuit would also score 5000 points if you could close a rollover switch and a blue drop target switch but the playfield layout makes this also very unlikely in the period of a Score Motor cycle.