Manufacturer D. Gottlieb & Co. used a common set of wire colors across their electromechanical pinball machine designs.  The wire color scheme was developed by Frank Underhill in the 1940s based in part on the scheme used by the telephone company at the time.  Spools of colored cloth covered wire were held in racks in a specific order so designers and cable assemblers could find specific colors quickly.  While colors were organized into groups or rows of six as shown in the following chart, wire spools were held in rows of twelve across on the wire racks although the order was the same.

Designers tried to use groups of adjacent wire colors where they could to indicate groups of related wires in a circuit or possibly to simplify cable assembly. Specific colors were also used for certain functions from game to game to facilitate both the cable assembly and troubleshooting.  The available wire colors and their order in the wire racks is shown in this chart: 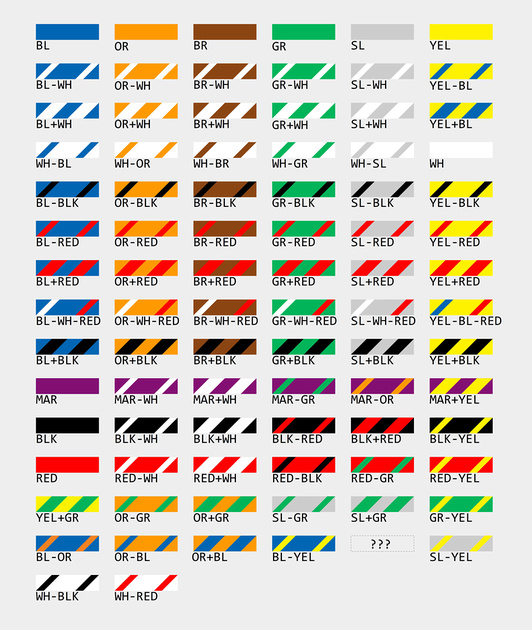 Note that this chart was recreated based on exchanges with game designer John Osborne and surveys of schematic diagrams.  Although Gottlieb did have "run-in" sheets that specified the available wire colors and their order an actual copy has not been found.  If you have a "run-in" sheet or related information please contact me.  Otherwise beware that this chart while largely correct may contain errors.

In particular one color near the end of the chart is unknown.  If you have evidence (schematic, photo, etc.) of a cloth covered wire color that is not on this chart or other corrections please contact me.

Cloth covered wire colors usually use two and three letter abbreviations to indicate the color of the wire. Color Code Abbreviation tables like these are included as a reference in many Gottlieb schematics.

Slate is used as a wire color name instead of Grey to avoid confusion between its abbreviation and the abbreviation for Green.  Yellow and white are not used on the same wire because they looked too similar even when new.  Note for example the last colors of the 2nd and 3rd rows in the color chart above.  Blue was substituted for white in both cases. 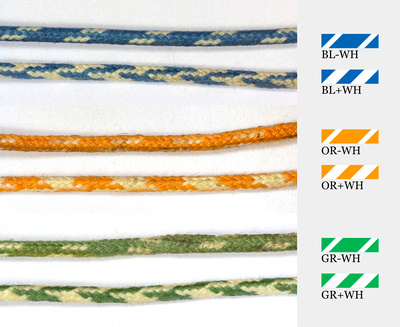 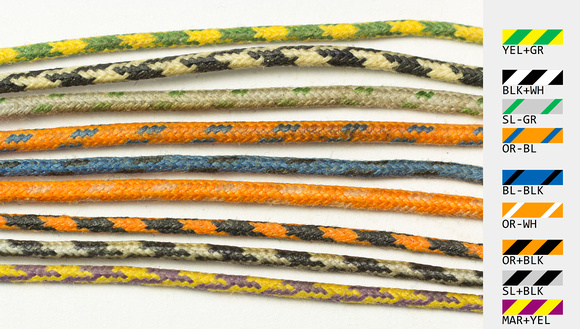 Note that the wires shown are not new. Time and use have muddied and faded the colors some.  It's common to have to use a little imagination to figure out what color a wire was when it was new.

There were rules or guidelines on how some wire colors should be used including: 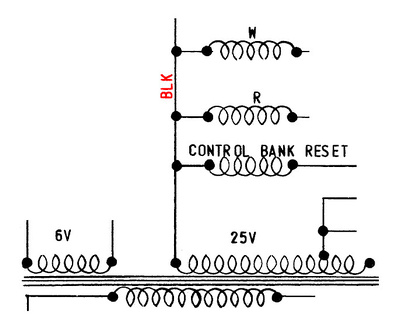 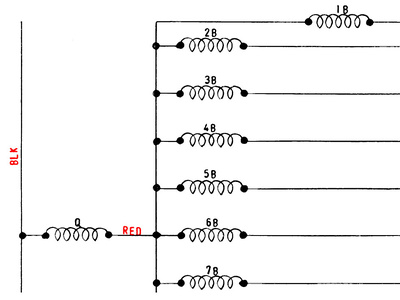 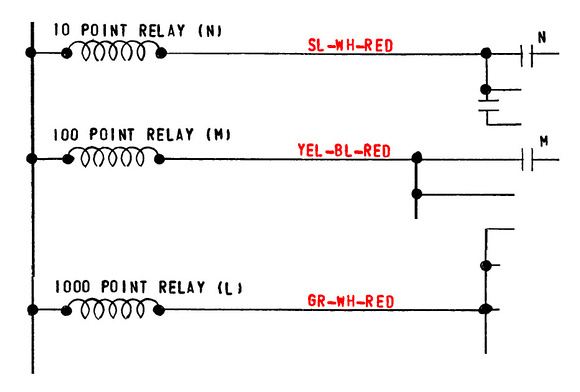 The first example is from a score reel wired with the first ten colors in the wire color chart.  Although the C or common connection is out of sequence, likely because it is shared with other devices, the 0-9 connections are all made with wire colors in order.  These wires are all part of the replay circuit that awards free games as replay levels are reached.

The next example shows the wiring of the coils in a trip relay bank.  The first six coils in the bank use the wire colors in order from the 6th row of the wire color chart. This may have been easier to assemble than randomly chosen wires since the wires in the rack would have been on adjacent wire spools. 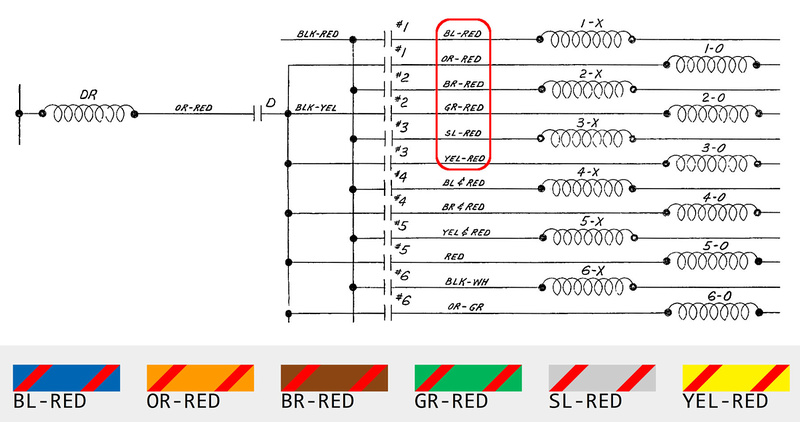 Wire colors in the 6th row of the chart

Another example shows that the ten wires used in this part of the match circuit, which would have been wired in order around the 00-90 Unit and Tens score reel printed circuit boards, would have come from the first ten spools of wire on the wire rack in the cable assembly area. 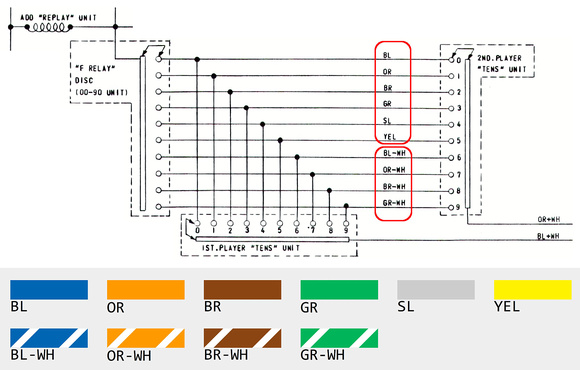 The first 10 colors of the wire color chart

A final example shows the six colors from the Maroon row used in order in the Ball Count light circuit. 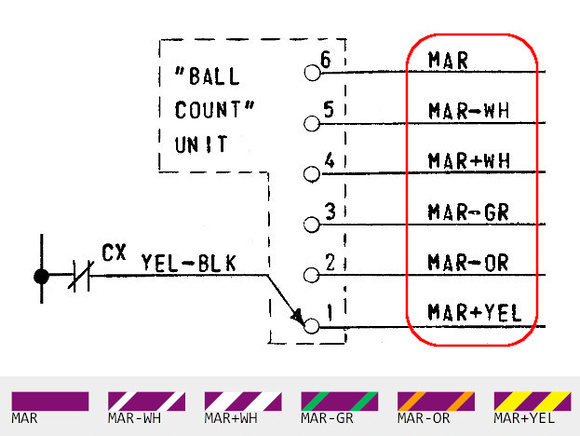 Connectors commonly called "Jones" plugs (*) are used to connect bundles of wires between the major components of an electromechanical pinball machine including the backbox panel, playfield, main cabinet panel and coin door.  These connectors too often followed wire color rules. 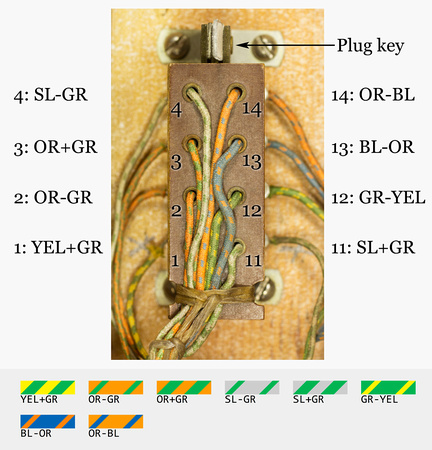 The connector pins are numbered from the bottom left corner up the left side to the connector or plug key, then up from the bottom right corner. The image above shows a connector with wire colors in a consecutive sequence from two rows near the bottom of the wire color chart.  Using consecutive colors was not a requirement but designers tried to wire the jones plugs (*) with colors ordered according to the wire color chart starting from the first pin in the lower left corner.  This simplified troubleshooting if you were looking for a specific wire, and assembly since the next wire was always farther along on the chart or on the wire rack.

Other wire colors were also used in the 120 volt portion of the circuit between the game plug and the transformer.  These wires were often covered with PVC or plastic instead of the cloth covered wire described here. 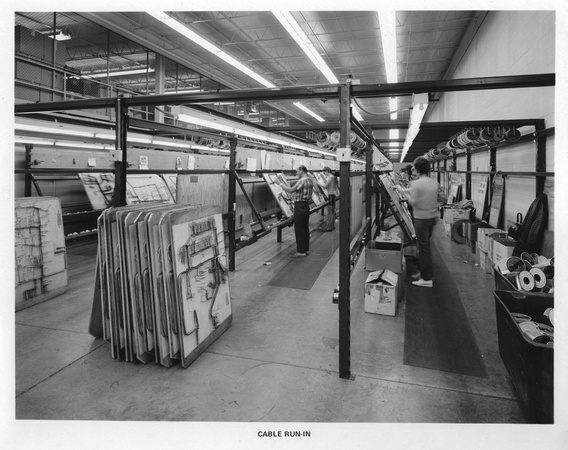 Cable Run-InCable assembly at Gottlieb in the early 1970s. Notice the wire racks above each station.

Breaking the cable assembly into smaller sections made it easier to spot errors.  The most experienced cable assemblers were usually at the end of the line where they were more likely than others to notice missing wires or other inconsistencies. 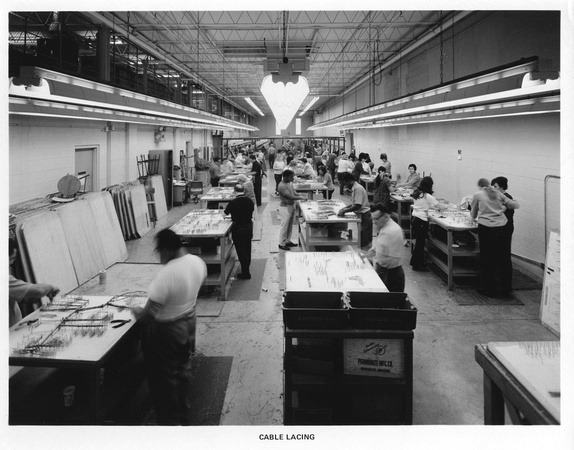 Cable LacingCable lacing at Gottlieb in the early 1970s 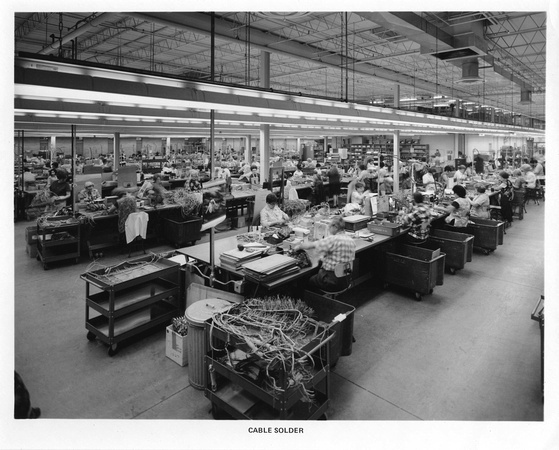 Completed cable assembles were laced together and delivered to the lightbox, bottom board or playfield departments where they were soldered into place.

The wire color chart at the top of this page is the result of communication with John Osborne and surveys of many schematic diagrams.  Schematic surveys were done manually and with OCR (Optical Character Recognition) software.  An example OCR result is shown below in red: 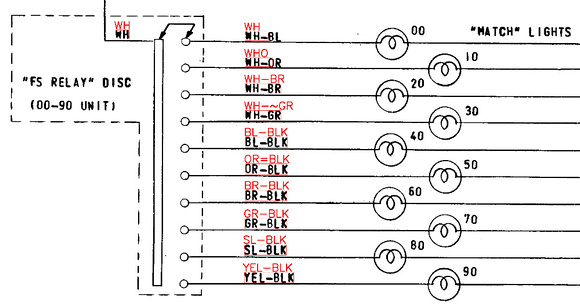 In this case the software correctly identified 7 of the 11 wire colors in this portion of the schematic. So while OCR can be a big help, it also generates a lot of incorrect data so results must be scrutinized carefully and verified.

I'd like to thank John Osborne and Steve Young for their help and contributions to this web page and William White who recorded an interview with Wayne Neyens and John Osborne discussing wire colors here.

(*) While the term Jones Plug has become commonly used in the EM pinball hobby to refer to the removable plugs that connect the main game components together, John Osborne points out that at the time they were known as connecting plugs or simply plugs unless referring to the line cord plug.