Here is an experiment to add scoring for two players and sound to a PinBox 3000 cardboard pinball game.  A simple skee ball style playfield was built from cereal boxes, popsicle sticks and hot glue.  The playfield has a ramp to launch the ball over the target which has three holes of increasing difficulty.  Extra bits of cardboard are glued under the playfield pieces to keep the ball from getting stuck underneath.

The scoring system uses switches glued under each of the three target holes.  Each hole awards a different number of points and makes a different sound.  There is also a switch mounted behind and below the flippers that closes when the ball drains and a button on the right side to start a new game.

These are the basic building blocks of the scoring and sound system: 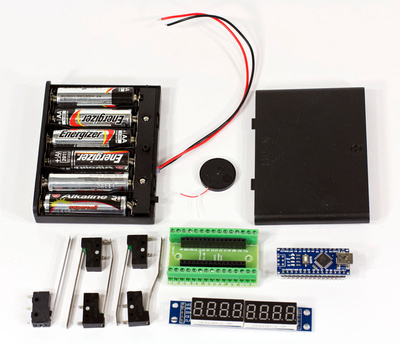 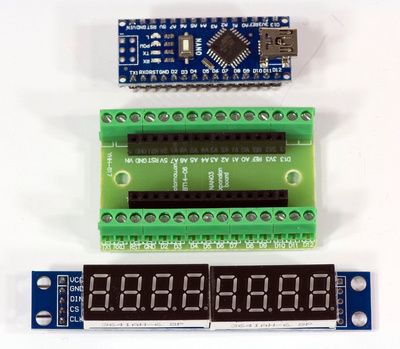 Three scoring micro switches are hot glued under the target holes so that each hole can award a different number of points.  The micro switches have long arms that make it easier for the ball to close the switch as it falls through the hole.  A ball guide is hot glued behind the flippers to guide the ball over another micro switch arm as it drains. 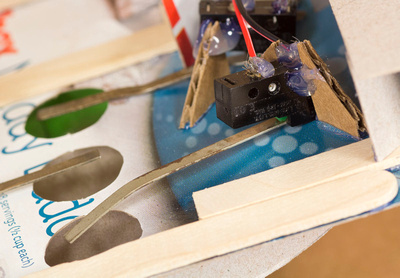 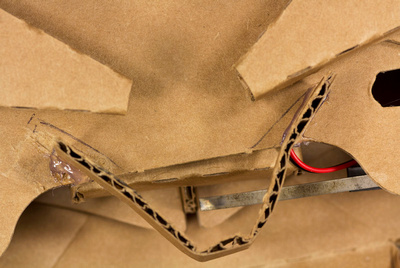 The start button is screwed to the side and has a switch inside that closes when the button is pushed. 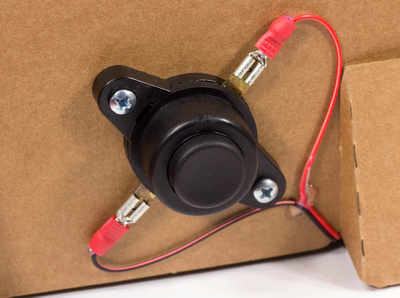 The battery pack supplies about 7.5 volts to the microcontroller board which steps that down to 5 volts for itself and for the LED display board.  A 9 volt battery would work too but would have less capacity and likely more wasted battery power in the conversion to 5 volts.  The built in switch on the battery holder makes it easy to turn the game off when you're done. 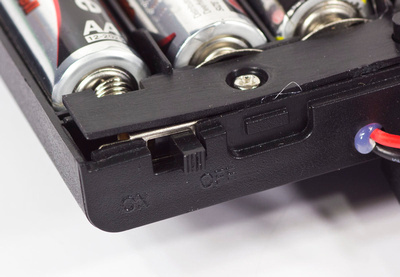 The microcontroller board is the mastermind of the game.  It's mounted to a screw terminal adapter board so that wiring connections can be made without soldering.  Most of the red and black wire pairs are connected to various switches on the game.  The connections at the switches are made by wrapping bare wire snugly around the micro switch terminals and adding a dab of hot glue to hold them in place.  This connection may not be as reliable as a soldered connection, but it seems to work reasonably well if you don't have a soldering iron. 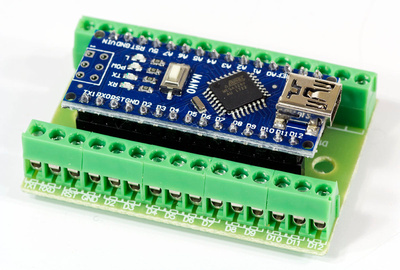 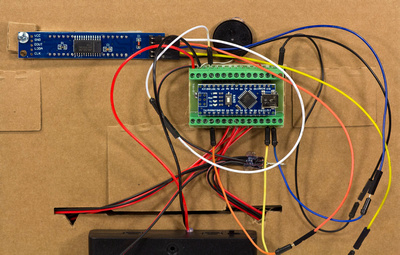 During the game the microcontroller runs a short program that determines how the game behaves as the various switches are closed: 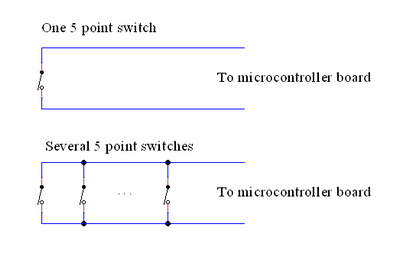 This game was put together to experiment with adding electronics to a PinBox 3000.  The parts were selected for their ease of use and low cost.  The micro switches work pretty well in this game but the microcontroller could make use of any kind of switch (a door bell, copper tape, aluminum foil, etc.) as long as it can make an electrical connection between the red and black wires.  The LED display too could be swapped out for other kinds of displays, or even individual or strings of LEDs.

Have a look at the other PinBox 3000 ideas on the Things to Learn page, or to learn more about how switches are used in real pinball machines visit the Switches and Electric Current page.