The flippers in a pinball machine have a unique design challenge compared to most other devices in the game.  They need to kick the pinball at least as hard as any other device whenever the player presses the flipper button, but they also need to last.  Most of the strong devices in the pinball machine (pop bumpers, sling shots, magnets, etc.) are driven by high powered solenoids to make the game lively and exciting.  But if left on for more than a few seconds these solenoids can overheat, melt the plastic sleeve, grip the steel plunger and probably blow a fuse.

The game designers took precautions in their games to ensure that most of those solenoids would only stay on very briefly.  The solenoid in a pop bumper for example is only on long enough to draw the plunger into the solenoid sleeve and kick the ball away.  Watch the video in the pop bumper section to see this up close and in slow motion.

Flippers on the other hand are under the player's control and can be kept on indefinitely by holding in the flipper button on the side of the cabinet.  In fact part of the game playing strategy is to capture the ball on a raised flipper and hold it there before taking a shot at a specific target. 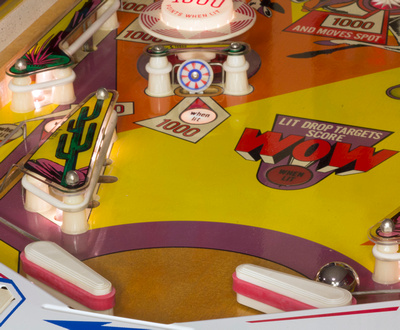 Trapped BallLining up the next shot

So the question is, how can a flipper stay on indefinitely without overheating and blowing a fuse?  The video in the flipper section gives a quick explanation.  Read on for a more thorough answer.

While a stronger flipper solenoid will give the pinball a better kick, it also introduces the potential problem of overheating. Most electrical devices generate heat as electric current passes through them.  For some devices like toasters or hair dryers, that's a good thing, but for other devices like laptop computers or smart phones, it's not.  In fact some devices like incandescent light bulbs convert most of the power they consume into heat, rather than light as you might expect.

Generating heat isn't a bad thing if it can be dissipated as quickly as it is generated, but high powered solenoids generate heat much more quickly than they can dissipate the heat.  When a high powered solenoid is left on too long it can overheat, start to smoke, melt its plastic parts or even burn nearby combustibles.  Pinball machines have fuses which should blow before overheating can happen but sometimes a blown fuse is mistakenly replaced with a larger fuse which can lead to problems. 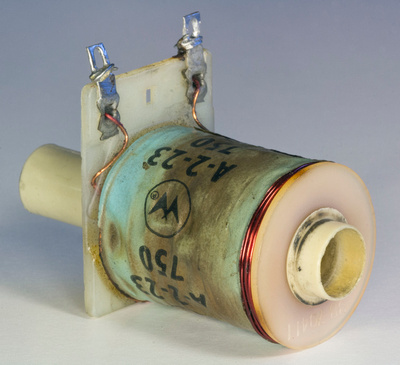 An overheated solenoidwith a burned wrapper 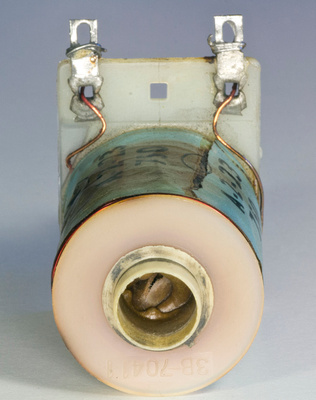 These photos show a solenoid that was left on too long due to a fault somewhere else in the pinball machine.  It had scorched its wrapper and melted its inner plastic sleeve before the fuse blew or someone smelled smoke and turned the power off.

To avoid overheating flipper solenoids while players hold on to a trapped ball, most flippers use solenoids with two coils of wire wound together around the same core.

The first coil is a high electric current/high power coil used by itself to kick the pinball up the playfield.  The second coil is a much weaker, low electric current/low power coil that is really only strong enough to hold the ball behind the raised flipper.  Because of the two coils wound together, flipper solenoids have three terminals instead of two as other solenoids do. 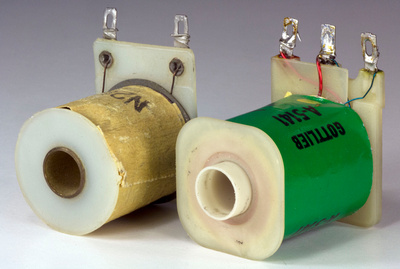 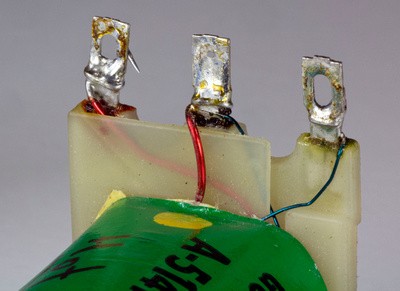 The following schematic diagrams may give you a better idea of how the two coils work together with the flipper button and end of stroke switch.  If schematics and switches are unfamiliar, reading through the Switches and Electric Current lesson first may be helpful.

The flipper is offThe flipper button switch is open and no coils are active.

The flipper is kickingElectric current passes through the high power coil but mostly around the low power coil.

The flipper is holdingLess electric current passes through both coils.

But wait, is that right?

You might think that two coils should be better than one, and that the last schematic of the flipper holding the ball should represent the strongest configuration of the flipper solenoid.  After all, there are more wire loops being used which should create a stronger magnetic field (as described in the Solenoids, Relays and Electromagnetism lesson) which should make the the solenoid stronger.

The reason that this isn't the case is that the resistance of the two coils, which is really dominated by the resistance of the low power coil, reduces the electric current that flows through the coils.  The penalty of the reduced electric current far outweighs the benefit of additional wire loops so the net effect is a weaker magnetic field, and weaker solenoid that uses less power. 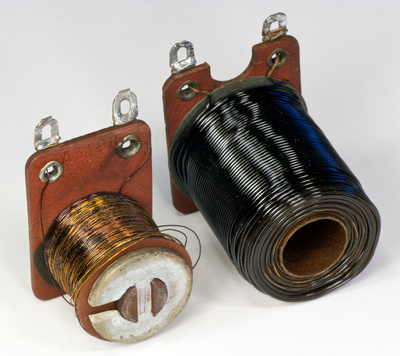 Low and high power coilsfrom a relay and a pop bumper

Notice that the smaller relay coil is wound with very fine wire and the pop bumper coil is wound with much thicker wire.  The thick wire has a much lower resistance to electric current than the fine wire for a given length of wire.  Think of it as the difference between drinking a milk shake through a straw and drinking it through a piece of garden hose of the same length.

Lower resistance lets the thick wire carry more electric current (as described by Ohm's law) which lets it consume more power.  More electric current also makes a stronger magnetic field inside the coil which makes the solenoid stronger for a given number of loops.  (Refer to the Solenoids, Relays and Electromagnetism lesson for reasons why.)

It's hard to tell from the photos, but lower power coils are often wound with more turns or loops of wire than high power coils.  The extra loops require more wire which adds to the resistance of the coil and further limits the electric current that can flow through it.

Some manufacturers use descriptive part numbers which tell you a lot about the construction of their solenoids.  Consider for example the FL-20-300/28-400 or AF-25-600/31-1000 flipper solenoids.  These tell you exactly what size wire and how many turns or loops are used in each of the coils.

Find more background information about other pinball machine devices is on the Things to Learn page.