The cardboard pinball Pop Target is something you can build at home for your PinBox 3000 or other custom pinball game.  It is based on a typical Drop Target used in pinball machines for many years but requires no electricity.  The Pop Target inverts the traditional Drop Target design so that you can reset it without having to get to the bottom of the playfield.  The video below briefly shows how the target works, and instructions for building your own follow.

To build your own Pop Target start by printing out these instructions. 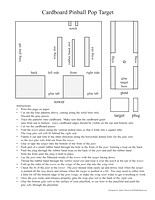 Once you've gathered up the tools and materials, you might want to browse through the rest of the instructions before you start so you know what's ahead.

Cut out the pieces

Cut out the four pattern pieces from the instruction sheet.  Only cut along the solid black lines; the dotted black lines are where you'll fold the pieces later.  You can discard the grey pieces. Cut out the patterns

Lay out the pattern

If you can't find a piece of cardboard quite big enough, you might be able to find one that is almost big enough.  In the photo on the left above, you can see that one corner of the top pattern piece doesn't fit on the cardboard.  This is ok because that corner is only used for gluing.  The pattern pieces are just a guide and can be modified and adjusted as needed so don't be afraid to revise them if you need to. 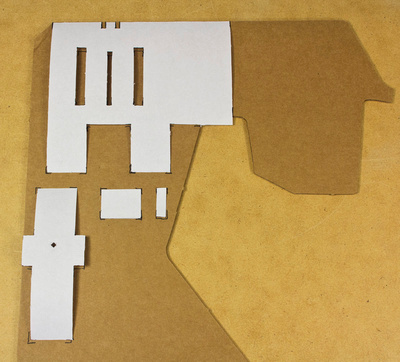 Trace around the patterns onto the cardboard 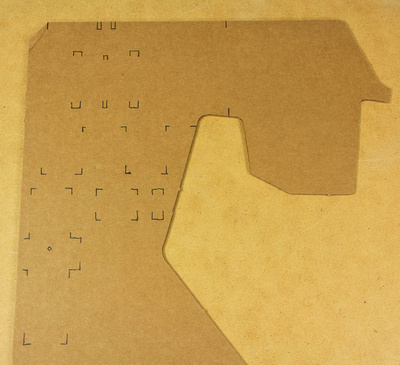 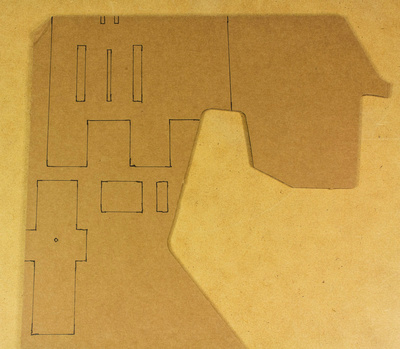 Double check the cardboard grain, then cut out the pieces

Be sure that the grain of the cardboard runs from top to bottom across your pattern pieces.  This will make them easier to fold and a little stronger than if the grain runs from side to side.  In the photo on the left you can see the wavy edges across the top of the pattern piece, but not along the side.  This shows you that the grain of the cardboard runs down from the top of the piece, parallel to the side.

Cut out the cardboard pieces carefully.  The outside edges can be cut with good scissors, but the slots will be a little harder with most scissors.  You'll get better results using a straight edge and something like a hobby knife, but ask for help if you're not comfortable using those tools because can they can give you a nasty cut too. 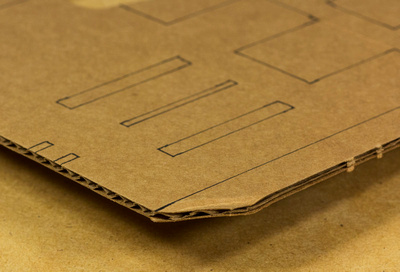 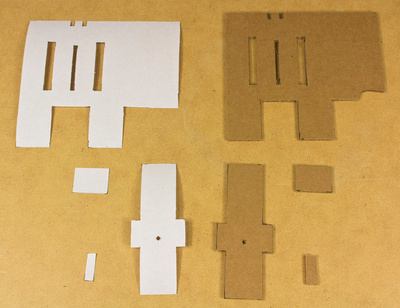 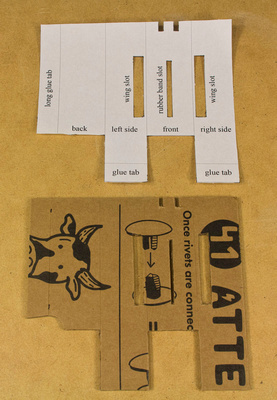 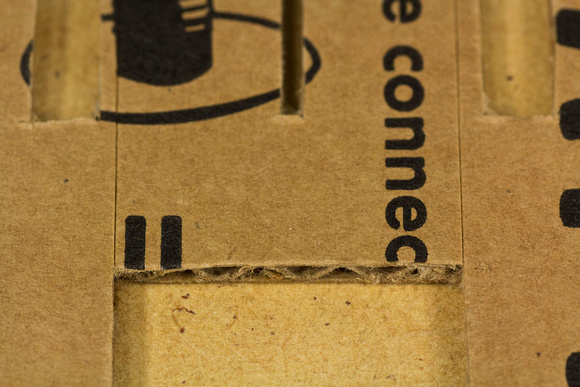 To fold the tower piece use a straight edge, or the edge of a table to help bend the cardboard in a straight line.  Cardboard wants to fold in some places more than others so it can be tricky to get the fold exactly where you want it.  If it doesn't turn out the way you want you can make adjustments later or cut out another piece and try again. 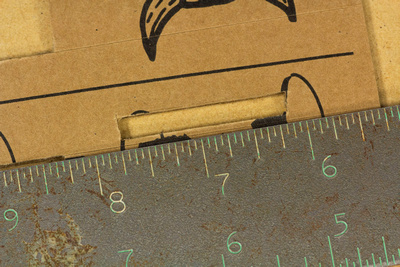 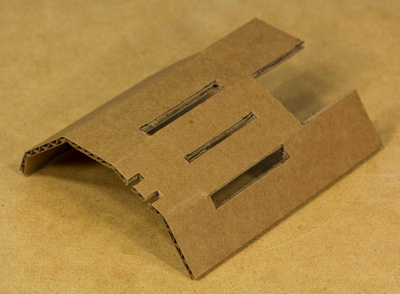 With the tower piece folded, gently wrap it around the post so that the wings on the post stick through the slots in the tower.  Make sure that the longer end of the post points towards the notch at the top of the tower and not the bottom of the tower. 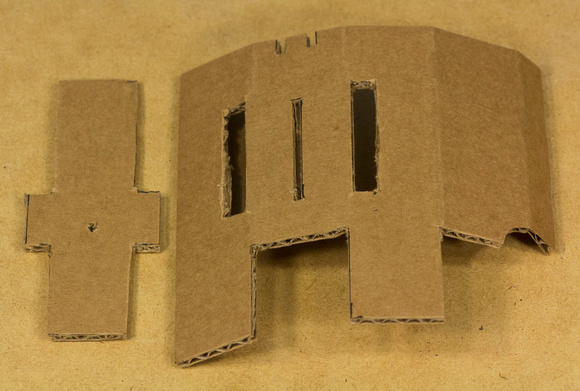 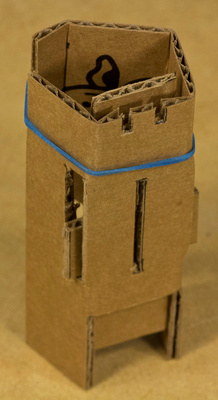 Once the post is folded inside the tower it should slide freely up and down through the slots.  Slide it all the way down and draw a line on the bottom of the post.  This will tell you where you need to glue or tape on the small target piece at the bottom.  Remove the post and attach the target to it paying attention to the line you drew. 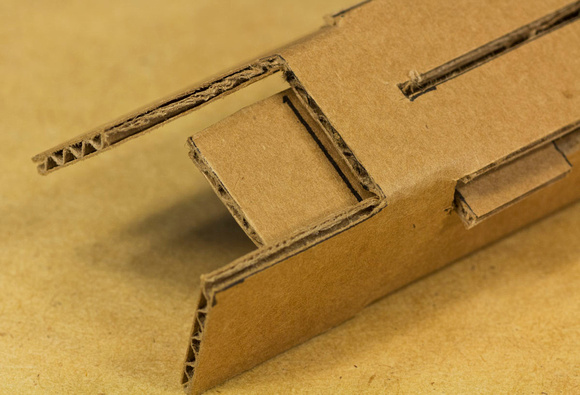 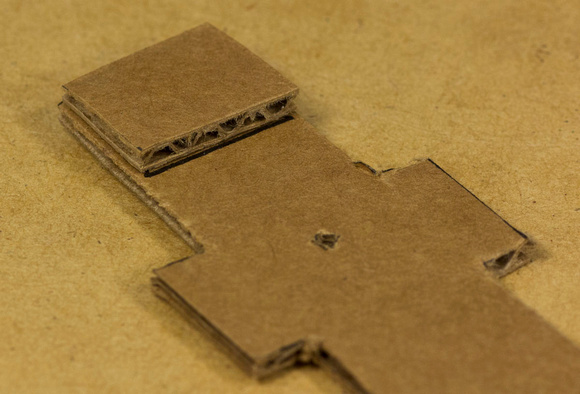 Glue the target below the line 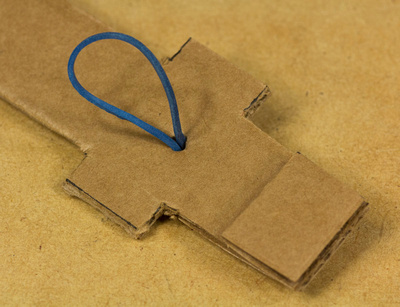 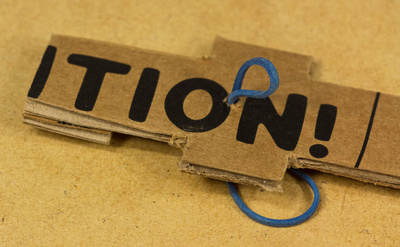 Rubber band loop on the back of the post 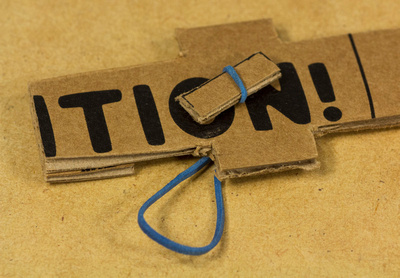 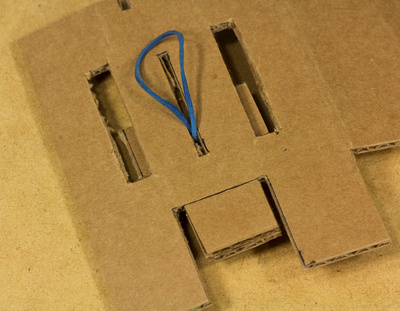 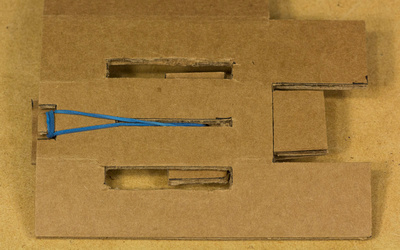 With the rubber band adjusted, fold the tower around the post making sure that the wings slip into the wide slots and that the target is on the bottom, facing out.  The tower should fold up into a square tube with one edge overlapping the other so they can be glued together.  But before gluing the tower closed make sure that the post can slide easily through the slots and that the target locks and releases as shown in the video.

Since cardboard comes in many thicknesses and doesn't always behave exactly as you want it to you may need to make adjustments at this point.  If the target doesn't lock at the bottom of the tower you may need to trim the bottom of the wings on the posts to make them shorter.  If the target doesn't release when pushed in you may need to make the slots wider.  Take your time and make small adjustments until you're happy with how it's working.  Don't be afraid to cut out another piece and try to make it better. 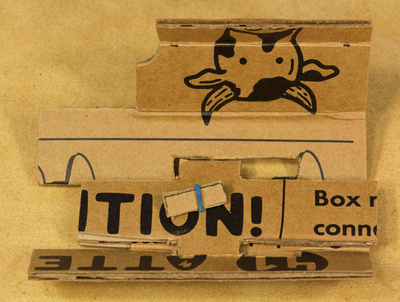 Close up the tower

Once everything is working you can glue or tape the tower together where the two edges overlap in the back left corner.  Use the two legs at the bottom of the tower to attach the pop target to your pinball machine.  They can either be folded and glued to the top of the playfield, or you can cut slots into your playfield, push the legs through the slots and glue them in place from below.  Either way, just make sure that the target doesn't touch the playfield so that it moves back easily when hit by the ball. 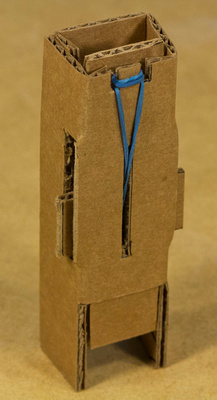 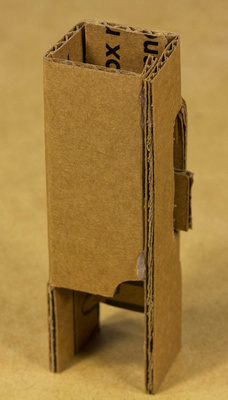 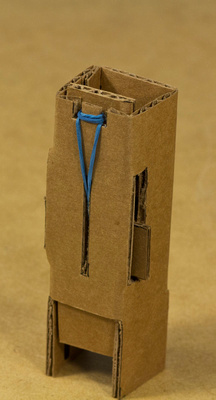 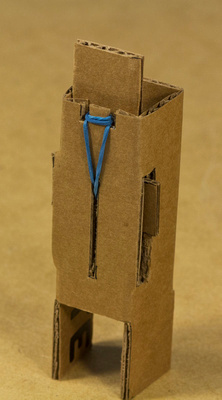 These instructions are just guidelines to get you started so don't worry if it doesn't turn out exactly as shown here.  You might want to try

Just have fun and don't be afraid to make mistakes.

Have a look at the other PinBox 3000 ideas on the Things to Learn page, or to learn more about some real pinball mechanisms visit the Small Boards page.