Circuits and schematic diagrams for electromechanical pinball machines can be hard to comprehend without some exposure, study and practice.  Some understand when combinations of switches might activate a bulb or relay coil but the added complexity of sequential or state based interactions seems to elude many observers. Explanations and descriptions of circuit behavior can help some who are interested but others may learn better with visual aids.

As someone who has spent a lot of time troubleshooting and explaining how circuits behave to others I've often wanted a way to slow down the circuits and show step by step how they work.  After a few false starts I eventually found my footing and developed a circuit editor and simulator to do just that: emSim. 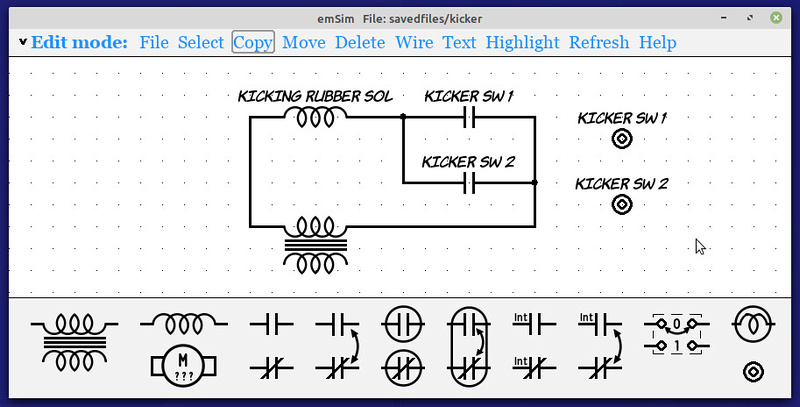 Circuit schematic editors and simulators abound and some of them might have been able to achieve similar results.  But after looking into some of the available options I decided that what I was after wasn't so much a general purpose tool but one that comprehends the peculiarities of EM pinball devices and looks and feels like the schematic drawings of these games. So after months of work, several rabbit holes and dead ends, a few rewrites and tons of troubleshooting I have something that's starting to produce the sorts of animated circuit simulations I had imagined - the basic emSim window shown above.

Once a circuit schematic is drawn in emSim it can be simulated to produce an animated schematic that changes as the circuit changes:

The intention is to document some common EM pinball circuits on these pages both with explanations and with animated circuit videos that guests can play backwards and forwards, fast or slow.  With a foundation of common circuits in place I hope to do the same with more elaborate, clever, unique and harder to comprehend circuits.

Once I've gotten through the circuits I have in mind I may take suggestions for others that would be interesting additions to these pages.  The emSim software will not be widely distributed, at least initially.  There are still bugs that need to be chased out before it's as reliable and user friendly as I'd like it to be.  I may offer copies to a few who would be willing to beta test the software and offer constructive feedback.

If you have a specific circuit you would like to see demonstrated or would like to help beta test get in touch through the Contact page.