Electric current allows precise control of the various devices by turning them on and off at the appropriate times.  When electric current flows through a device it delivers the energy that the device needs to do the work it was designed to do (e.g. turn on a light bulb, pull in a plunger, turn a motor, etc.).  Switches are used to control when electric current is allowed to flow through each device in an electromechanical pinball machine.

Switches used in pinball machines are often made with two or more stiff metal blades held apart by a small stack of insulators. Near the end of each blade is a contact where the electric current passes from one blade to another when the contacts touch each other. Switches are opened and closed mechanically by the player, or the ball, or by various devices in the game like relays.

Normally open switchNo current can flow through the switch

Normally closed switchCurrent can flow through the switch 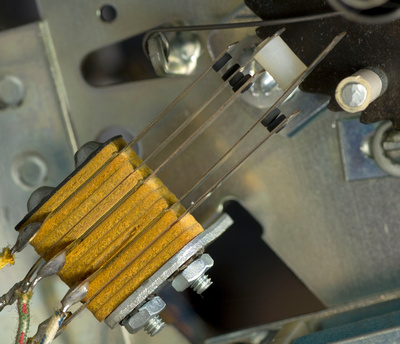 In a pinball machine, switches tell the circuits most of what they need to know about what is going on in the game.  Switches are mounted on the playfield to detect when the ball hits each target, behind the flipper buttons to know when to fire the flippers, and on most of the hidden devices to tell the circuits what else is going on in the game.  In each case, the switch allows electric current to flow, or stops it from flowing, so the relevant circuit can do, or stop doing something.  For example when a target on the playfield is hit, the switch behind it closes briefly which allows electric current to flow through the circuits that add a point to the score reel.  The video below demonstrates a few different switches.