Designing a game from scratch like those on the Games page may seem like a daunting task at first, but like many design problems it breaks down into several simpler, easier to understand problems.  Using The Puzzle game as a guide let's recreate parts of its design from the ground up using its component parts.  It might be useful to review the video at the end of The Puzzle's description to better understand the steps below.  If switches and electric current are unfamiliar, a visit to the Switches and Electric Current lesson might be helpful.

The Puzzle uses two different kinds of relays to manipulate most of its switches: standard relays and trip relays.  Standard relays activate only when an electric current passes through their coils and then relax and return to their rest position (with the help of a spring) when the current is cut off.  Since the relay coils consume power and can heat up when active, standard relays are usually activated for only short periods of time.

The coils in trip relays are also active only when an electric current is applied, but they are built into a spring loaded assembly that trips when the coil is activated and stays tripped until mechanically reset by a separate solenoid.  (Trip relays behave much like circuit breakers that trip electrically, but need to be mechanically reset.)  Trip relays can remain in either the set or the tripped state indefinitely without consuming any power and are used to hold a bit of information for longer periods of time.

In other words, standard relays can only indicate whether or not something is currently activating the relay while trip relays indicate whether the coil was activated at any time since the relay was last reset.  In The Puzzle, trip relays control the six lights that indicate how much of the combination has been uncovered.  Once at trip relay has been tripped, its light turns on and stays on until the game is reset at the start of the next game.

The game behavior is determined by a set of rules.  These rules can be described with sentences or as a set of equations.  Sentences are helpful for understanding or explaining the game behavior to someone else.  Equations are useful for designing the circuits that enforce the rules.

The equation for the vending machine could be:

This equation and others below use a form of simplified algebra called Boolean algebra, sometimes called Boolean logic.  In Boolean algebra, all results and variables are limited to just two values: true and false (or 0 and 1, or on and off); no other values are used.  And there are just three basic functions used: AND, OR and NOT.  While this may seem like a trivial way to represent a rule it is in fact the way most digital semiconductor chips are designed and developed.

The equation above can be translated into a circuit using an arrangement of switches.  Note that the symbols used for switches are those used by electromechanical pinball machine designers through the 1970s.  They are not to be confused with the symbols used for capacitors which won't be used in this discussion.

Circuit for the simple vending machine

Here the battery provides electric current to the light bulb, but the bulb only lights if the top switch closes, OR if both of the bottom switches close.  The two bottom switches are connected in a line, or in series, so current can only flow through them if both are closed.  This matches the AND part of the equation from above.

The two bottom switches are wired along side, or in parallel with, the top switch.  This matches the OR part of the equation.  Together the arrangement of the switches matches the equation and the rule from above.

A circuit to activate Trip Relay 1

Here the coil for the first trip relay is activated only when the switch under the first button in the combination is pressed; all other combination buttons are ignored.  Once the button is pressed Trip Relay 1 will remain tripped until a new game is started.

The circuit for this equation could be:

A circuit to activate Trip Relay 2

In this circuit, the Trip Relay 1 switch in the middle represents a switch that is normally open as shown here, but closes when Trip Relay 1 (from the previous circuit above) has tripped.  With two switches in its circuit, Trip Relay 2 will only activate after Trip Relay 1 has been activated and when the second combination button is pressed.

This same rule can be used by all the remaining trip relays if it is generalized to: activate the trip relay if the correct button is pressed and the previous trip relay has already been activated.  The circuits for Trip Relays 3-6 below look the same as the circuit for Trip Relay 2 above: 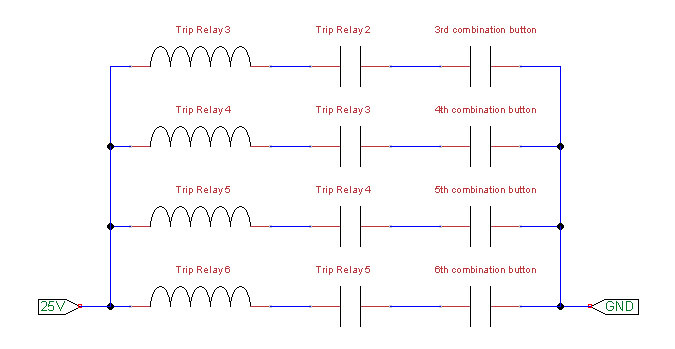 A circuit to activate Trip Relays 3-6

The Score Reels present a problem

The circuit for this equation could be: 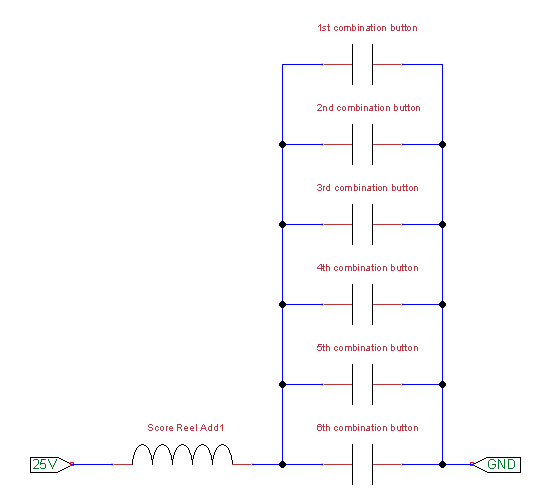 A circuit to activate the Score Reel

To get around this problem we can use standard relays to close two switches each time one of the combination buttons is pressed.  This provides copies of each combination button switch that can be used in different circuits.  For example: 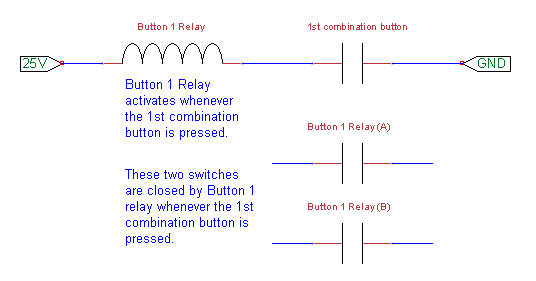 A circuit to create copies of switches

With this circuit, the Button 1 Relay (A) switch and the Button 1 Relay (B) switch behave the same as the 1st combination button switch so we can use one in the trip relay circuit and the other in the score reel circuit.  This demonstrates how a standard relay can be used to generate multiple events (trip a relay and advance the score reel) from a single event (press a button).

To create copies of all six of the combination button switches we need a relay for each one: 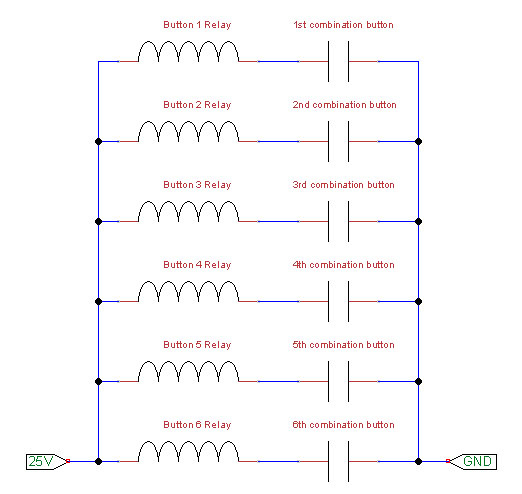 Relays to create copies of the combination button switches

Note that the circuit drawing does not specify how many switches each of the Button Relays has.  Ultimately each relay will need to be configured with as many switches as the design requires.

Now that copies of the combination button switches are available the Trip Relay circuit can be revised to use them: 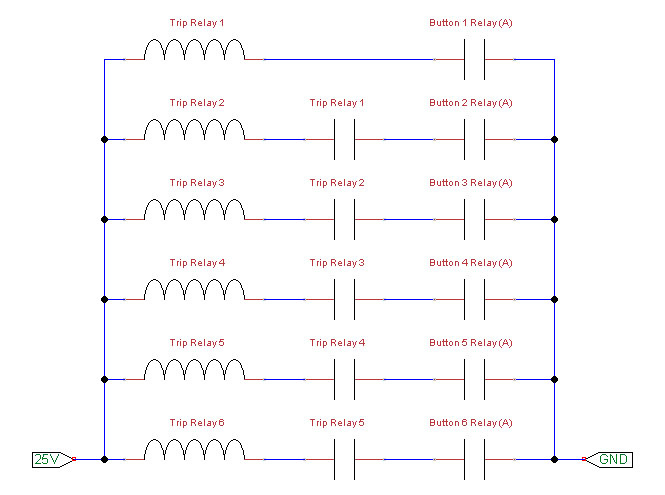 And the Score Reel circuit can be revised to use its own button switch copies: 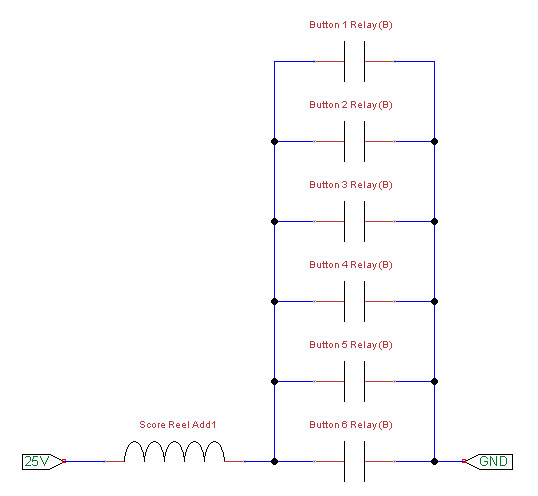 But there are two Score Reels

So the rule for the 10s digit score reel is:

Or the rule could be reworded to:

The equation for the 10s digit score reel is:

And the circuit for both score reels becomes: 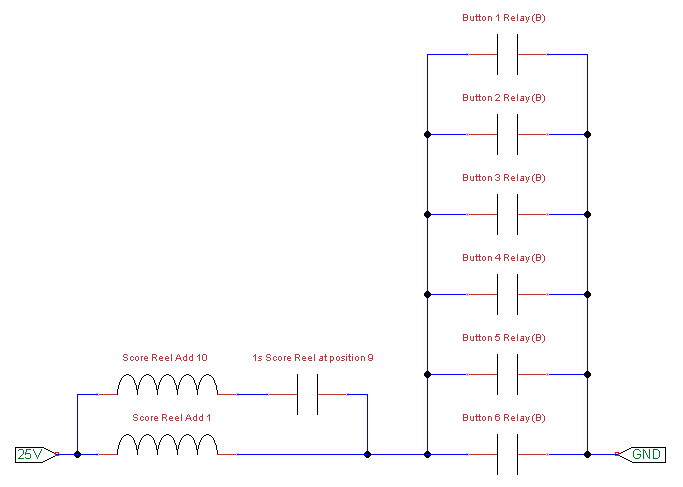 Circuit for the 10s and 1s score reels

More complicated circuitry is required to start a new game.  The first thing that needs to happen in any pinball machine or similar game like The Puzzle is that the hardware needs to be reset to a known starting point.  In this case the score reels need to be reset to 00 and the lights all need to be turned off.

The score reels need to be reset to 00 from whatever arbitrary score was left from the previous game.  The tricky part is that the score reels have no way of knowing what score is showing on the reels and no way of knowing how many times they need to advance to return back to 0.  Early game designers realized however that you don't really need to determine how many times a score reel needs to advance to reach 0, you just need a way to stop advancing once you reach 0.

To see the difference in how the two circuits behave, watch the video at the end of the Score Reels section.

What pinball machines, and The Puzzle do to reset score reels to 0 is to try to activate each score reel ten times through the reset circuit that will stop the reel at 0.  This guarantees that whatever score is showing before the game is reset will end up at 00 by the end of reset.  The reason reels are activated ten times, and not the minimum nine times will become clear in a moment.

The Score Motor is used to open and close the switches that activate the score reels during reset.  Each group of switches on the score motor activates at a specific time as the motor turns, as shown in the Motor Sequence Chart: 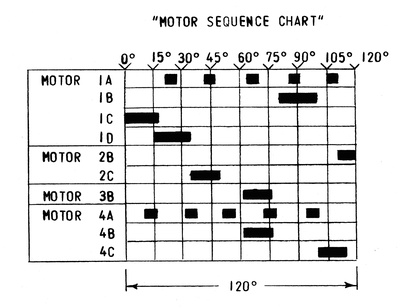 In this chart the black rectangles indicate when and for how long each group of switches on the score motor is activated when the score motor runs through one cycle.  For example the switches in group 1C activate once at the very beginning of the cycle, while those in group 4A activate five times during the cycle. Watch the first video in the Score Motor section for a better understanding of how the motor sequence chart describes the actions of the score motor.

The Puzzle uses one of the switches in group 4A to activate the reset circuits in the score reels.  The score motor is in fact activated for two consecutive cycles during reset so the switch that resets the score reels closes ten times, guaranteeing that any remaining score will be reset back to 00.  The Puzzle could try to close some other switch the minimum required nine times, but that would be an unnecessary complication.  The tenth switch closing is just ignored by the reset circuit in the score reels.

Rules and equations can certainly be used to describe the following circuit for resetting the score reels but until the meaning of the various relays and switches is understood the rules and equations would only confuse the issue.  Instead, the circuit is explained as a sequence of events below. 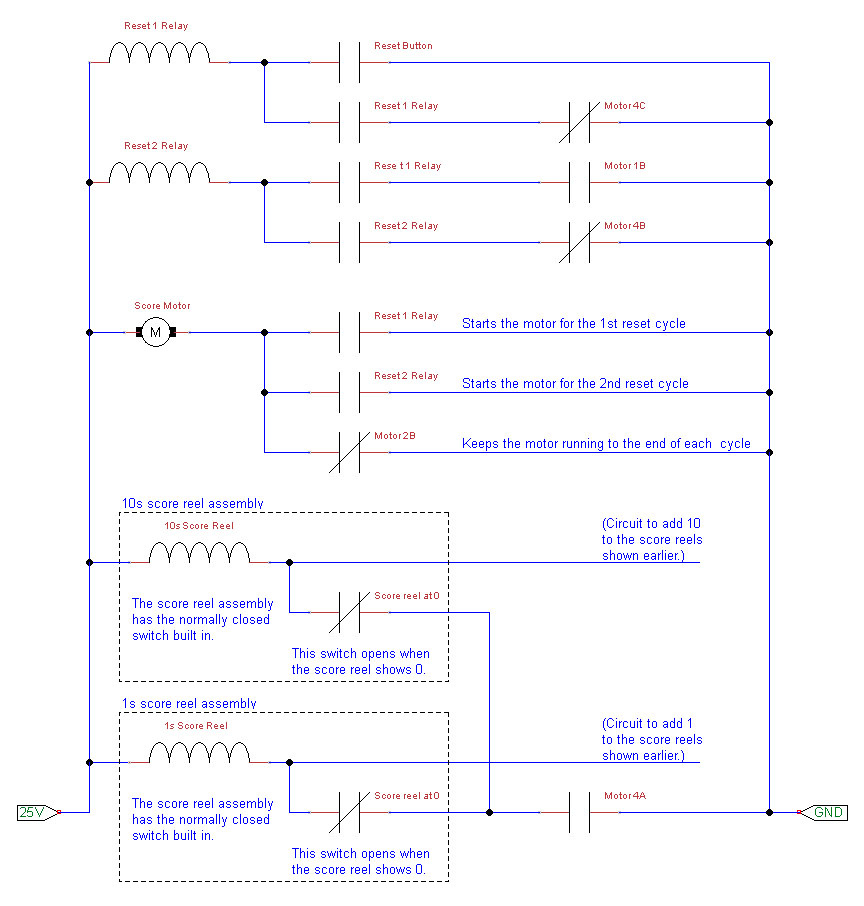 Circuit for resetting the score reels

Referring to the Motor Sequence Chart above will help to clarify the following sequence of events defined by this circuit.

When the Reset 1 relay activates, it closes another switch that in turn activates the score motor (in the middle of the drawing) and starts it running.  As the motor runs through its first cycle, a switch mounted to it in group 4A closes repeatedly (at the bottom of the drawng) which advances both score reels unless they have reached 0.  In this first cycle, the score motor closes the 4A switch five times advancing each score reel up to 5 places.

While the score reels are resetting during two consecutive motor cycles, the trip relays need to be reset too so the lights go out in preparation for a new game.  This is done with a single large solenoid below the trip relays.  It activates briefly at the end of the first motor cycle (just after the Reset 2 relay activates) when a motor switch in group 4C closes as shown here:

A circuit to reset the trip relay bank

Even though the motor switch in group 4C above closes once in each motor cycle, the large trip relay bank reset relay doesn't activate again during the second motor cycle because by then the Reset 2 relay has deactivated and the rightmost switch above has opened.