These small boards were built to demonstrate individual devices from pinball machines.  They all have 24v (for relays and solenoids) and 6v (for lamps) AC power wired along the back.  Each board attaches to its neighbor on the left side to form a string of display boards wired together.  The first board in the string attaches to a transformer which supplies power to all boards in the string.  Using the same connectors on each board allows the boards to be laid out in any order, and makes it easy to swap out or remove a board if it breaks down.

Each of the display boards is shown below with its instruction card which is typically propped up behind the board.

Click on any thumbnail to jump to the details section for that device.

These devices represent the simplest building blocks of most electromechanical pinball machines.

Solenoids drive most of the motion in a pinball machine and are featured in most of the other displays.  This solenoid is purposely weak and slow moving to show how it can lift the steel plunger when power is applied.  Normally solenoids move their plungers so quickly that they are hard to follow. 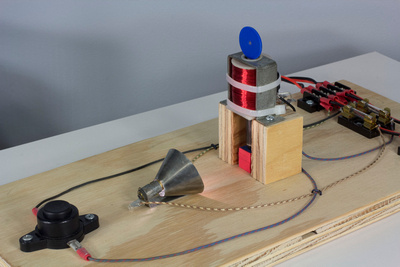 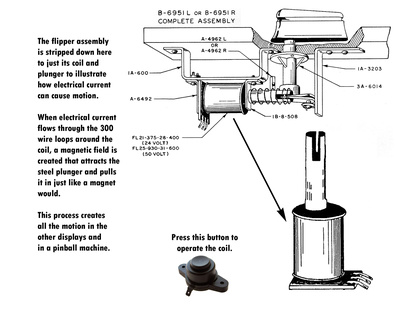 This video shows how the solenoid works.  In this case the steel plunger is attached to a wooden dowel with a round target at the top to better show the motion of the plunger as it is drawn into the solenoid.

For a more in depth explanation of how solenoids convert electricity into motion, visit the Solenoids, Relays and Electromagnetism page.  The Patents page includes patent information about the first use of a solenoid in a pinball machine.

Relays are smaller and weaker than solenoids and are usually only used to activate or hold switches to enable features and lights, or to release mechanisms that were activated by a solenoid (as in the Disappearing Post, Zipper Flippers and others below).  This board includes a simple relay, an interlocking relay which can stay in either position indefinitely without power, and a relay configured as a miniature stepper that turns a cam to open and close a switch. 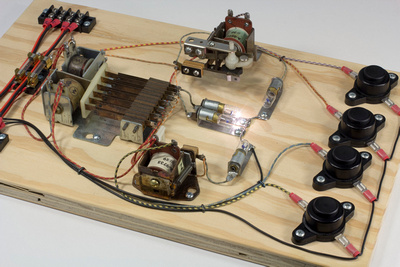 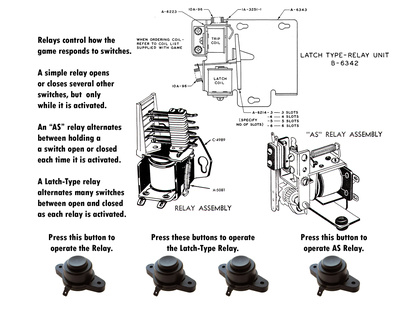 The video below shows how the various relays behave.

For a more in depth explanation of how relays convert electricity into motion, visit the Solenoids, Relays and Electromagnetism page. Find patent information about relays and switch stacks on the Patents page.

Perhaps the single most recognizable feature of a pinball machine, the Pop Bumper (or Jet Bumper) can kick a ball away that is approaching from any direction. 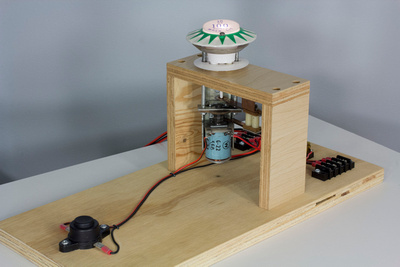 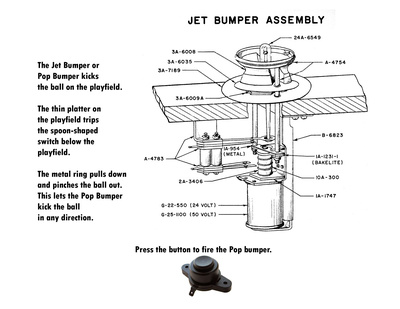 Pop Bumpers can fire several times per second and are too fast to easily discern the sequence of events.  The version below uses a microcontroller and a couple of small motors to animate the pinball and pop bumper in slow motion. 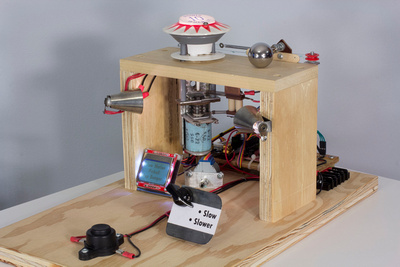 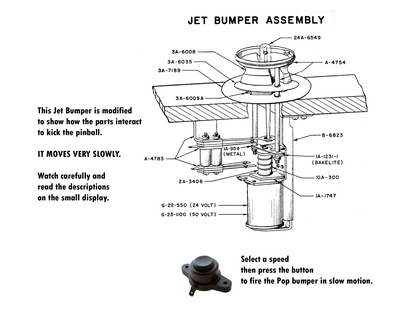 Watch the video to see these pop bumpers in action.

Pop bumpers close up and slowed down

Find patent information for a few versions of the pop bumper is on the Patents page.

While flippers appear on all pinball machines now they weren't invented until the late 1940s.  Before then players had to nudge the ball around the playfield without tilting the game or rely on ball kickers that would only fire when the ball closed the appropriate switch. 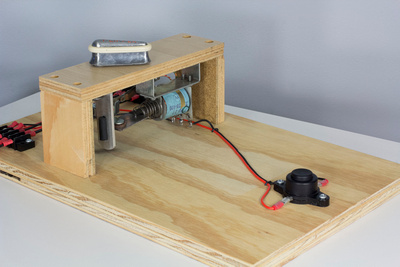 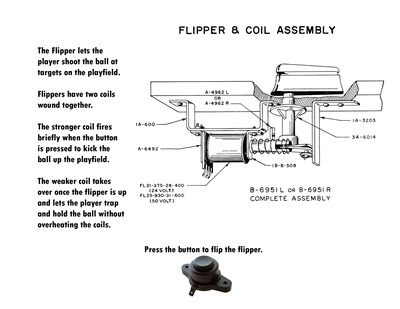 Zipper Flippers work just like the Flipper above but with the added feature that they can swing towards eachother to close the gap and prevent the ball from draining between them while remaining fully functional.  They would open and close during the game based on which targets were hit.  Zipper flippers were used on relatively few pinball machines.

Find patent information about flippers and zipper flippers on the Patents page. 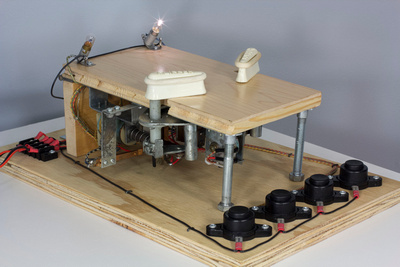 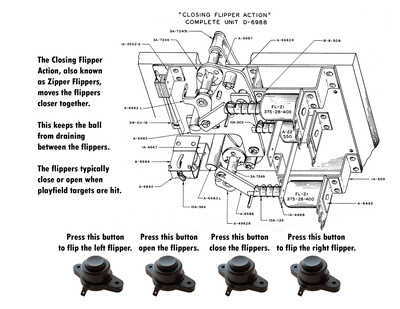 Watch the video below for a better idea of how flippers work or, for even more detail visit the Flippers, coils and power page.

Steppers are used to step through a number of positions sequentially.  They use ratcheting mechanisms to advance one step at a time and some use escapement mechanisms similar to those found in clocks to retract their steps either one step at a time, or all the way back to the beginning.

Stepper units are used to track features that step through a sequence as the game is played.  For example the game might have several features that light up one at a time in order.  This stepper is similar to the Score Reels below because it advances one step at a time, in one direction only.  It differs from the Credit Unit and Ball Count Unit below because it can only advance; it cannot decrement or reset. 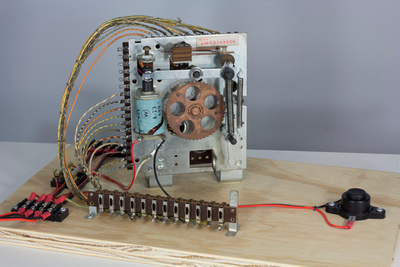 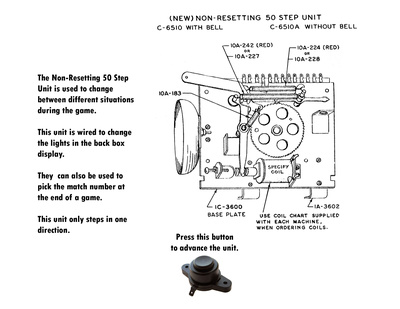 In the video below the stepper is paired with an orphaned light board from an unknown game to show how the stepper can be wired to step through a sequence of lights.  The video also shows some closeups of the ratcheting and rotating contacts.

Find patent information about steppers on the Patents page.

The Ball Count Unit keeps track of how many balls the player has played.  Lights wired to the Ball Count unit usually indicate the ball in play.  The Ball Count Unit is another form of stepper that can step forward one step at a time or reset back to the beginning.  It cannot decrement by one step like the Credit Unit below. 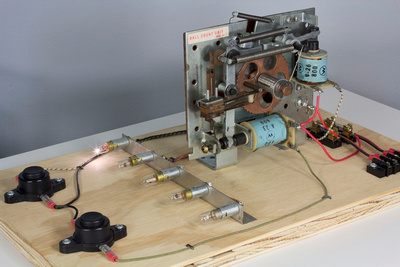 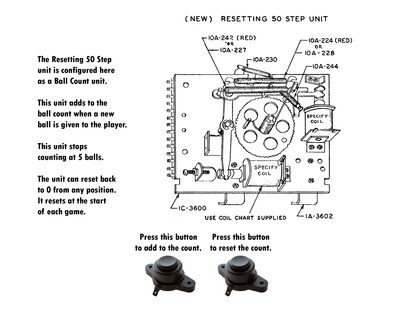 In the video below the larger solenoid is used to advance the gear and contact fingers one step at a time.  The smaller relay just lifts a catch out of the way allowing a spring to reset the gear to the starting position.

The Credit Unit keeps track of how many game credits the player has and is usually visible through a small window in the backglass.  Coins and replays increase the total while each new game decreases the total.  The credit unit is a form of stepper unit that can step both forward and backward one step at a time. 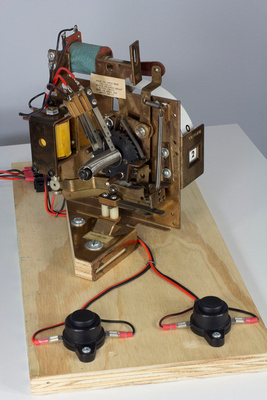 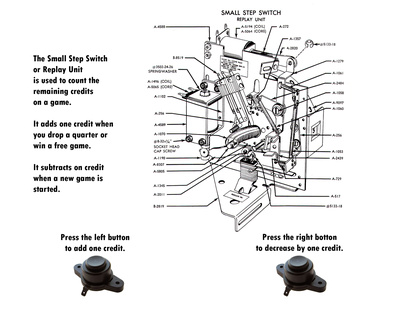 The video below demonstrates the mechanism that limits the credit unit to one step at a time in either direction.  This is done with mechanical lever arms activated by the increment and decrement solenoids.

It also reveals how the credit unit is electrically limited to a range of values (e.g. zero to 14 credits in this case).  The video frame below shows two pins mounted to the dark grey gear which rotates to reflect the number of game credits.  When there are zero credits remaining, the pin on left opens the two switches in the upper left corner to cut power to the decrement solenoid of the credit unit and to the new game circuit.  In this state the credit unit will only allow the player to increment the credit count by winning a replay or depositing a coin.

Similarly, when a maximum number of credits is reached, the other pin (at the bottom of the frame below) opens the third switch which disables the increment solenoid of the credit unit.  This prevents the credit unit from over winding.

Score reels are simple counters similar to mechanical odometers in older cars.  Each reel can be advanced individually (to add 10 points, or 100 points for example), or advances when it's lower neighbor rolls over from 9 to 0 (from 89 to 90 for example).  Each reel also has a separate reset circuit used at the start of a new game that lets it advance only until it reaches 0, where it stops. 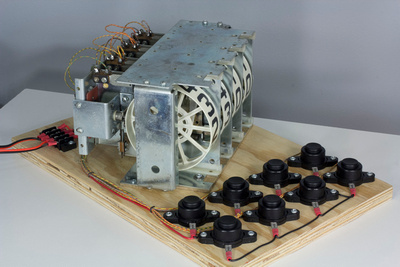 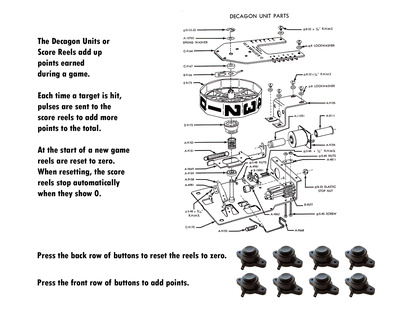 You may have noticed in the video that when a score reel resets to zero it advances its higher neighbor by one.  This is not the normal behavior.  A complete pinball machine has extra circuitry not present on this demonstration board to prevent this from happening.

Find patent information about score reels on the Patents page.

The Projection Unit was used to project the available game credits onto a frosted window on the backglass.  Light from a bright bulb on the back of the unit shines through a pin hole, through the printed wheel, and through a focusing lens before reaching the glass.  On this board the backglass is represented by a small piece of plastic held in a tube in front of the Projection Unit lens so the projection can be seen.

A predecessor to the Credit Unit above, the Projection Unit was used in some games until the late 1940s. 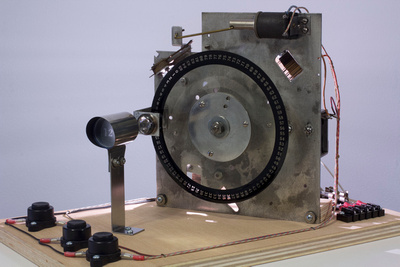 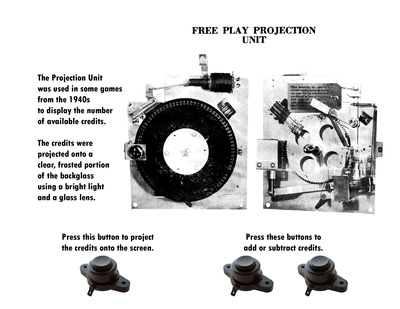 The video below shows how the bulb, pin hole and lens project a number from the printed wheel onto the frosted plastic window.  Note that the numbers on the wheel and behind the lens are upside down to appear correctly after the image passes through the focusing lens.

Find patent information about the Projection Unit on the Patents page.

The Spin Unit is a clever way for the game to randomly change a game feature.  Ordinarily steppers can only increment, decrement or reset.  The Spin Unit is able to randomly change from any position to any other position.  It does this by using a pair of steppers.  The first, larger stepper is configured like a Ball Count Unit; it steps up one step at a time and can reset back to its starting position.  During a game this stepper advances periodically as certain targets are hit or switches close.  It also resets periodically when other targets are hit.

Each time the switch on the spinner closes, it sends a pulse to the second, smaller stepper which is configured as a simple Stepper (with no decrement or reset).  While the second stepper does advance a single step at a time, it advances a step for each revolution of the spinner which effectively randomizes its final resting position. 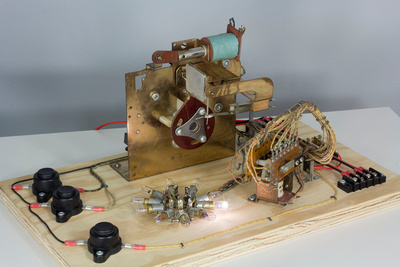 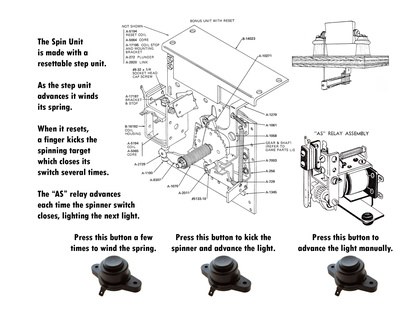 The video below demonstrates how the smaller stepper can be advanced randomly with the large stepper/spinner assembly or just manually with the extra button.  You might also notice that the large stepper has a limit switch on the back side that opens to prevent the stepper from over winding the spring.

Find more assemblies, playfield targets and pinball toys on the next page.