Score Motors are used in electromechanical pinball machines and other arcade games to support more elaborate or sequential functions. To see how the Score Motor activates the switch stacks mounted to it watch the short video in the Exhibits section of the web site.

A simple example to illustrate one common use of a Score Motor is the 50 point circuit shown below.  A Score Reel used to keep score takes one step forward (e.g. from 20 to 30) whenever a pulse of electric current is sent through its coil. A ball that hits a 50 point target on the playfield briefly closes a switch behind the target which generates just one pulse. How then does one pulse turn into the five pulses needed to advance the 10 point score reel five times (e.g. from 20 to 70)?

The solution requires switches driven by a Score Motor and an extra relay: 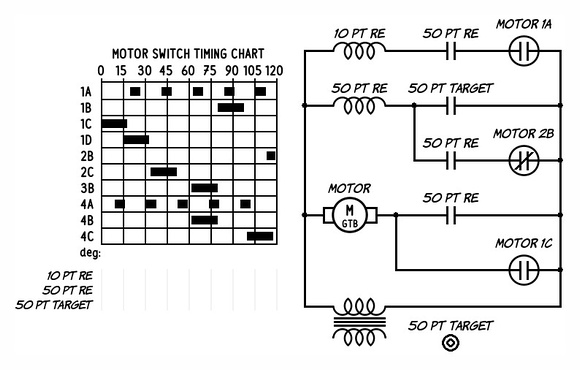 This schematic diagram includes switches that are activated by cams or pins on the Score Motor.  Score Motor switch symbols are enclosed in a circle to distinguish them from switches controlled by relays or other devices.

This schematic also includes a Motor Sequence Chart on the left to illustrate what happens when the Score Motor runs.  This chart is specific to most electromechanical games made by Gottlieb.  Bally and Williams have similar but distinct charts.

The numbers across the top of the chart represent the angle of the Score Motor as it turns from one home or index position to the next.  Gottlieb motors always turn in increments of 1/3 of a turn, or 120 degrees.  Along the left side of the chart are the names given to the various switch stacks that are mounted to the motor.  The motor controlled switches all have labels (e.g. "MOTOR 1A") comprised of the motor label ("MOTOR" in this case) and the switch stack or event that activates them (e.g. "1A").

The black boxes in the score motor chart indicate when switches in each switch stack activate or change state as the motor cams turn.  The MOTOR 1A switch in the upper right corner of the schematic drawing for example closes 5 times in each 120 degree motor cycle as shown in the first row of the chart.  The Motor 2B switch below it in the schematic opens just once at the very end of the motor cycle as shown in the fifth row of the chart.

The Motor Sequence Chart has the same kind of information found in a player piano roll or on the pin drum of a music box.  Each of the black boxes in the chart could for example indicate when and for how long each key on a piano plays its note.

This short video shows how the circuit behaves when the 50 Point (PT)  Target at the bottom is hit by the ball and briefly closes the 50 Pt Target switch.

Take a moment to play the video.  The video player should allow you to pause, move backwards and forwards and explore the circuit changes at your own pace.  The green and grey wave forms below the sequence chart represent the state of the two relay coils and the target for the duration of the simulation.  A green cursor sweeps across the chart to indicate the progress the score motor has made in its 120 degree cycle.  The score motor angle in degrees (deg:) is also shown just below the score motor symbol and below the green chart cursor.

The simulation starts when the 50 PT TARGET at the bottom of the schematic activates to simulate the ball hitting a 50 point target on the playfield. The target is only active for a brief time before the ball rolls away.  The label of the target turns green while the target is active as does the last wave form below the chart for the brief period that the target is active.

While the 50 PT TARGET is active it closes the normally open 50 PT TARGET switch in the circuit to the 50 PT RE (relay) coil which completes the circuit to the relay coil and activates the relay.  The 50 PT RE wave form below the chart shows how the relay becomes active as soon as the target is hit.  It remains active for most of the rest of the simulation through its own lock in circuit as seen in the Lock In circuit example earlier.

Notice how some of the pulses in the motor sequence chart have turned grey.  That indicates that those pulses are not used during the simulation. The pulses that are used remain black and will turn green when the cursor passes over them indicating that they are currently active. 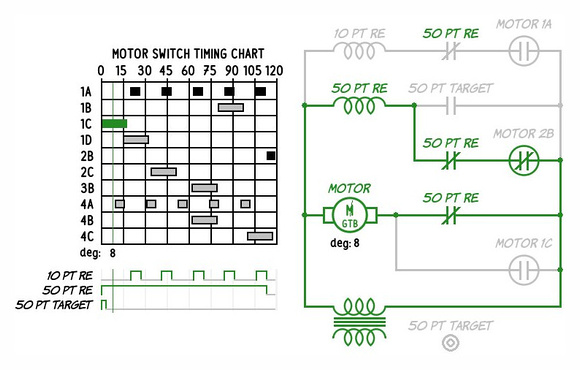 The simulation is shown here when the score motor is at about 8 degrees into its rotation and the target has since become inactive. The 50 PT relay which was activated by the target remains active and has closed the normally open 50 PT RE switch in the score motor circuit which completes the circuit and provides current to run the score motor.

The 50 PT relay has also closed the normally open switch at the top of the schematic drawing.  This switch hasn't accomplished anything yet, but it will enable pulses from the MOTOR 1A switch to reach the 10 PT RE coil as the MOTOR 1A switch opens and closes. The 50 PT RE. switch at the top of the schematic is required because without it 50 points would score any time the score motor runs through a cycle, during the reset sequence at the start of a new game for example. 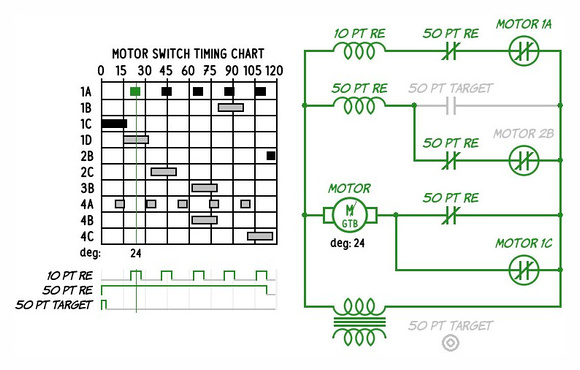 The simulation is shown here soon after the score motor activates the 1A switch stack for the first time.  The green cursor over the chart intersects the first 1A pulse which has turned green to indicate that the pulse is happening.  The 10 PT RE coil at the top of the schematic is active for the first time because the MOTOR 1A switch has closed. The 10 PT RE wave form under the cursor below the chart has activated and turned green to reflect the state of the 10 PT RE coil.

Notice also that the normally open MOTOR 1C switch in the bottom right of the schematic has closed providing the Score Motor with another complete circuit.  The MOTOR 1C switch is sometimes called the Motor Index switch because once the motor starts the 1C or Motor Index switch will keep the motor running until the beginning of the next motor cycle which is when the motor reaches its next index or home position where it can stop. 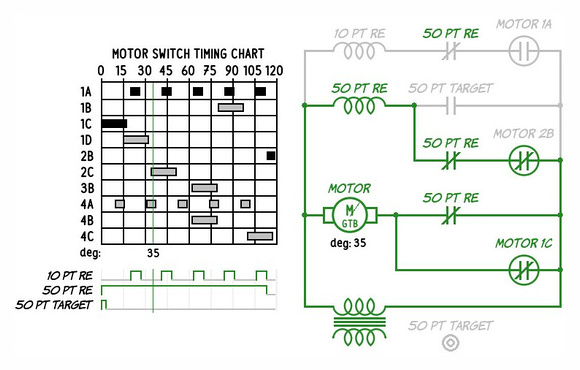 At a Score Motor angle of about 35 degrees the Motor 1A switch has reopened to deactivate the 10 PT RE coil. Its waveform shows that the first of five pulses has completed which would have advanced the Score Reel through the first of its five steps.

The 50 PT RE coil is still active and the Score Motor is still running. 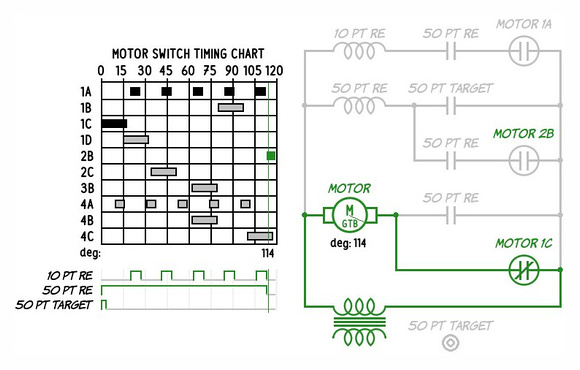 At this point in the simulation the Score Motor has turned through 114 degrees of its 120 degree cycle. The simulation wave form has recorded five pulses through the 10 PT RE coil which would have advanced the Score Reel through five steps (e.g. from 20 to 70).

The circuit for a 50 Point target in the previous example used all five pulses from the Motor 1A switch to activate the 10 point relay and advance the 10 point Score Reel.  But how might a 20 point target work since there is no switch stack (or row in the Motor Sequence Chart) with just two pulses?  One way is to combine motor controlled switches as in this schematic for a 20 point target: 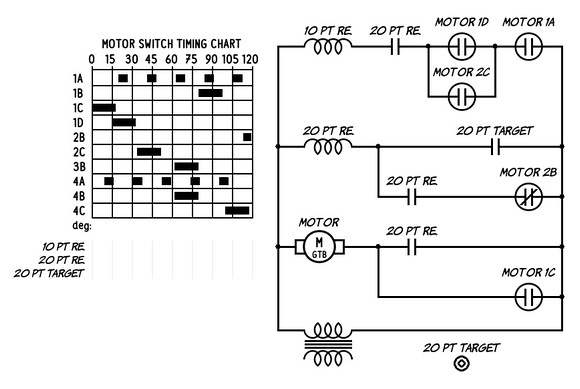 The only real difference between this circuit and the 50 point circuit above is that two normally open motor controlled switches (Motor 1D and Motor 2C) have been introduced in the 10 PT RE. coil circuit.  These switches are used to allow only the first two pulses from the Motor 1A switch to activate the 10 PT RE. coil.

The animation of the 20 point circuit above shows how the Motor 1D and Motor 2C switches each allow a single pulse to get to the 10 PT RE. coil, while blocking or masking the last three pulses. 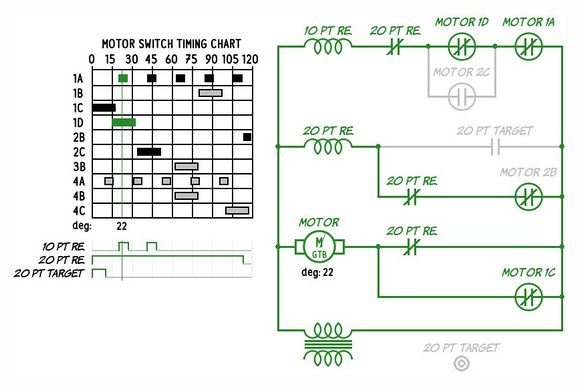 At 22 degrees into the Score Motor rotation for example both the Motor 1A and Motor 1D switches are active in the sequence chart and in the circuit so the 10 PT RE. coil activates as well.