These pages will illustrate some of the common circuits used in EM pinball machines.  The intention is that becoming familiar with some of the circuits presented in these pages will help you understand the schematic diagrams for your own games and may help you troubleshoot and diagnose issues with them.

Electromechanical pinball machines were designed and developed before solid state programmable devices like microprocessors were available or economical.  While there are no processors running game programs in these games they had elaborate rules just the same.  The programming for those rules was done with combinations of various types of switches that are activated by devices in the game.  As a simple illustration consider the schematic circuit diagram below that demonstrates many of the basic logic functions used in any computer program including game programs running in modern pinball machines.

This circuit is drawn with standard schematic symbols used at the time. The symbol with two parallel vertical lines may look like a capacitor but at the time the symbol was used to identify a Normally Open switch, or a switch that is open in its idle state. The companion symbol with a diagonal line through it is a Normally Closed switch, or a switch that is closed in its idle state.

Also shown are light bulbs, a transformer to provide power and two push buttons at the bottom labeled A and B that activate the switches in the schematic. 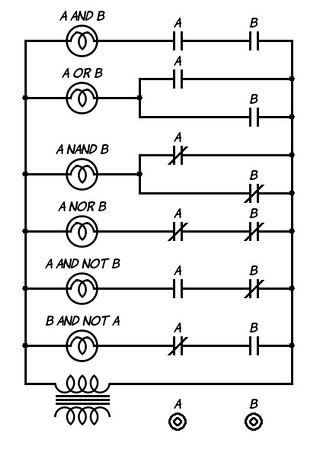 The drawing and short video above show the starting circuit and the state of the circuit in the four possible conditions of the two push buttons at the bottom.  Each of the four states is shown individually and described below.

The light bulbs are each labeled with the logic function (e.g. AND, OR, NAND, etc.) its circuit demonstrates. 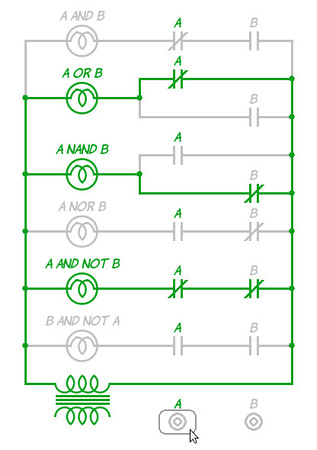 "A" switches are active 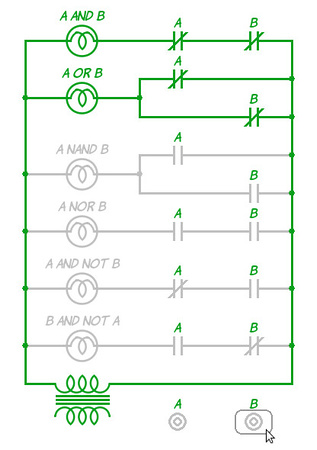 "A" and "B" switches are active

Activating the A push button (left image above):

Activating the B push button while A is still active (right image above): 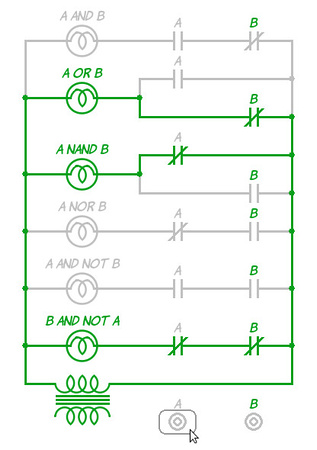 "B" switches are active 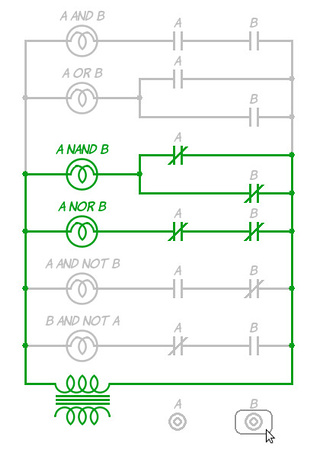 "A" and "B" switches are inactive

Deactivating the A push button while the B push button remains active (left image above):

Deactivating the B push button leaving both push buttons inactive (right image above):

Most pinball machines have kicking rubbers or sling shots that kick the ball away when the pinball strikes the rebound rubber ring. The schematic drawing and animation below demonstrate the circuit for the Kicking Rubber Solenoid that kicks the ball. 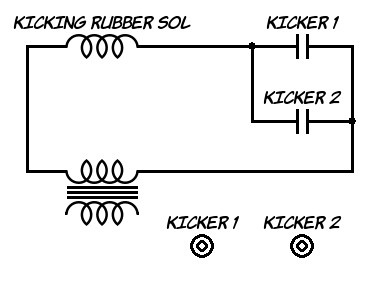 Typically there is a switch mounted on either side of the kicker behind the rubber ring. When the ball hits the rubber ring and either switch closes (shown here by activating the Kicker 1 or Kicker 2 push buttons) the circuit to the Kicking Rubber Solenoid completes and the ball is kicked.

The kicker solenoid is only active as long as one of the switches is closed. It fires whenever a switch closes, but if the switch opens again before the kicker has swung through its full range of motion the kick may seem relatively weak.  That is why a brief or glancing bounce of the ball off the rebound rubber sometimes gives a weaker kick than a hard bounce more directly into the rubber ring.

Notice that this circuit is identical to the A OR B circuit in the Logic example above.  Either switch closing is all that is necessary to complete the circuit and activate the solenoid.

Lock In or Hold circuit

A frequently used circuit in EM pinball machines is the Lock In or Hold circuit.  It is designed to provide a more consistent pulse of electric current to whatever device is being activated.  The circuit has two paths into the solenoid or coil similar to the Kicking Rubber example above, but there is an extra switch that provides an important function. 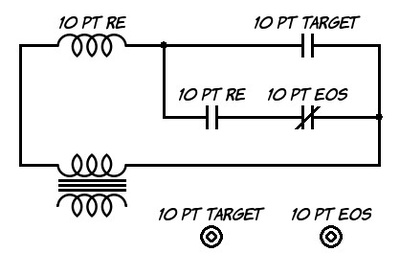 This is a typical circuit for the 10 Point Relay (10 PT RE) which fires in the game whenever 10 points should be added to the score.  When it fires the 10 Point Relay closes other switches (not shown) that drive the score reels, sound the chime, etc.

The 10 Point Target push button at the bottom represents a 10 point target somewhere on the playfield.  It closes a switch when the ball strikes the target but as described in the Kicker circuit above it may not close the switch long enough to deliver a sufficiently long pulse to accomplish all the work that needs to be done.

The two switches in the lower circuit path into the coil are there to extend the time that the 10 Point Relay is active.  The 10 PT RE switch in the lower path is on the 10 Point Relay itself and closes when the relay is active.  The 10 PT EOS (End of Stroke) switch is on the 10 point score reel (not shown) and opens once the score reel has completely activated.

The other device introduced below is the Interlock relay.  A simple relay like the 10 Point relay introduced earlier activates when electric current passes through its coil and relaxes when the current flow stops. The switches controlled by a simple relay also activate and relax with the current flow. Interlock relays are built with two coils and a mechanical interlock so that the relay can hold its last state even after current flow through its coils has stopped.

One coil on an interlock relay puts the relay in the Reset (or Latched) state when current passes through it.  The other coil puts the relay in the Tripped state when it fires.  When either coil relaxes or becomes inactive however the mechanical interlock keeps the relay and the switches it controls in the last state.  So even after the Trip coil fires and relaxes for example, the interlock relay can remain in the Tripped state indefinitely due to its mechanical interlock.  It only changes back to the Reset state when the Reset coil fires.

A Trip relay behaves the same as an Interlock relay.  The difference is that trip relays are typically mounted together in a frame where they share a single common reset coil.  So while they can trip individually when their trip coils fire they all reset together as a group when the reset coil fires.

The upper Make/Break switch controlled by a simple relay has a single label (ACTIVATE) indicating the name of the relay coil or device (push button in this case) that activates it.  The lower Make/Break switch controlled by an interlock relay has a label for each relay coil or device that drives it.  In this case the Interlock relay trips when the ACTIVATE push button fires and resets when the CLEAR push button fires.  The bottom label in the square brackets indicates which state ([RESET] or [TRIPPED]) the interlock relay is in since the state of the relay cannot be otherwise determined when both activating devices or drivers are inactive. 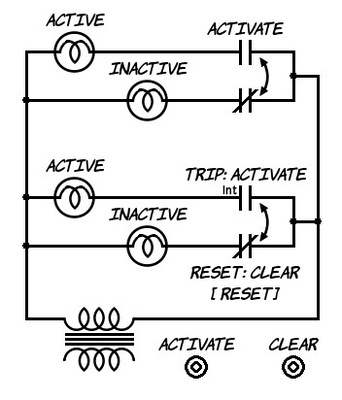 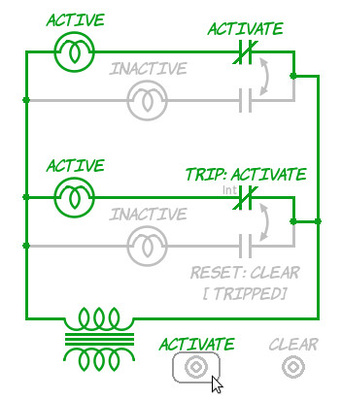 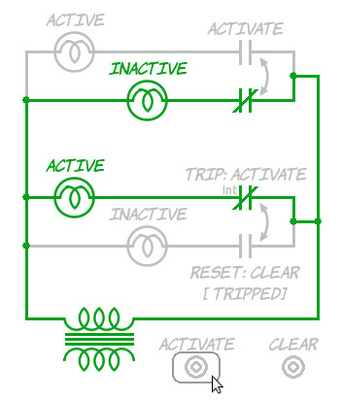 When the ACTIVATE push button is activated in the left schematic above both Make/Break switches change and both ACTIVE bulbs illuminate. Both simple and interlock relays behave the same in this situation.  The interlock relay has also changed from the [RESET] state to the [TRIPPED] state. 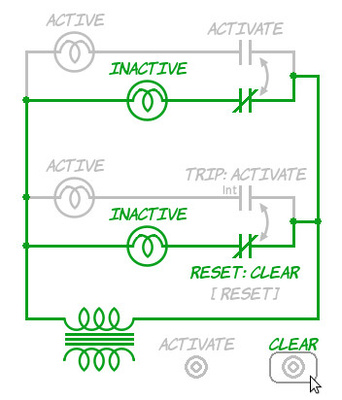 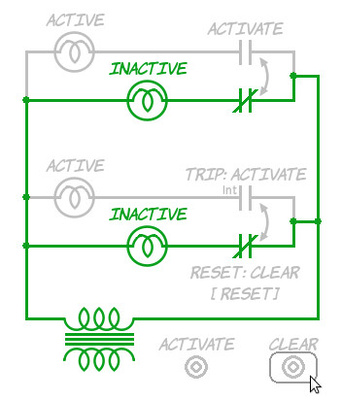 Both switches are inactive

Activating the CLEAR push button has no effect on the upper Make/Break switch since they are unrelated, but the lower switch resets and becomes inactive and the interlock relay returns to its [RESET] state.  Only then do the bulbs wired to the two switches match again.