There aren't many photos of the development of the Horse Racing game, but here are a few.

These show the condition of the drive gears used to move the horses back and forth along the track before restoration along with some notes to help with reassembly.  The gears are not fixed to the common axle, but are sandwiched in between fixed collars with spring tension.  Friction is ultimately what moves the horses back and forth, assuming that the lock (not shown) for each gear is released. 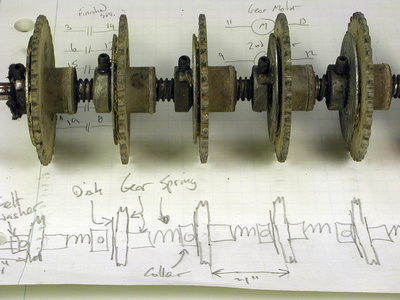 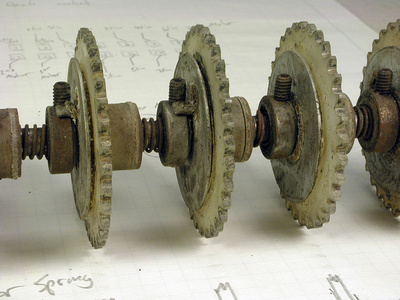 The disassembled gears revealed thin leather washers between the plastic (nylon?) gear and the steel plate.  The axle to the right was worn and ultimately replaced. 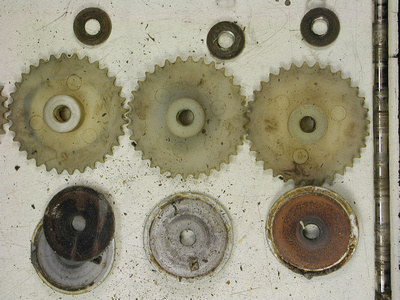 Once the initial design for the game was done on paper, the necessary parts were assembled and dry fit to see where everything would need to go.  A temporary cabinet was built from scrap wood to shake out the basic idea.  Priorities for the layout included:

If you compare this layout with the final version you'll see that several more relays were added.  Also added, almost as an afterthought were the score reels.  They were added to emphasize that winning is harder than it may appear. 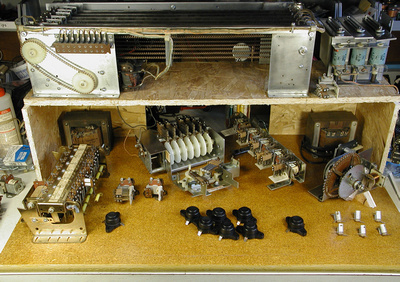 This scan of the horses is here because the images have been manipulated.  When installed in its original game, the horse racing unit would race the horses from right to left.  So the horses, being just cardboard cutouts with printing on one side, were made to face to the left.  In this game the horse racing unit was turned around to expose the motor, drive gears and connector on the back side.  The scan was made so new horse prints could be made with the horses facing right with their numbers not reading backwards. 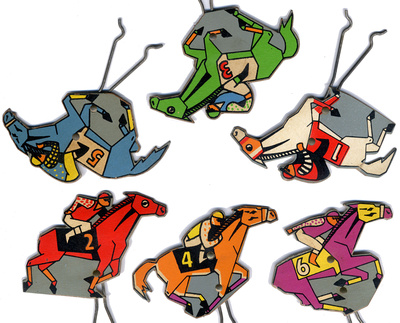 Like the Horse Racing game above the Baseball Game was first designed on paper.  That meant thinking through ways to show off the Man Running Unit, coming up with compelling rules, sketching out ideas and sussing out details.  This is one of many pages of notes that captured ideas for later refinement. 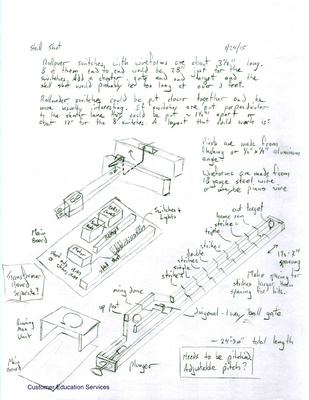 Once the rules converged schematics were drawn and an inventory of required parts was put together and laid out to see how they would all fit.

The basic footprint of the game was determined by the first game, The Puzzle, which was built on the main board from the bottom of a pinball machine cabinet.  It was just a nice piece of plywood that fit the need at the time - just another piece of used equipment.  Since that first game was built the same footprint was used for the Horse Racing game and the Baseball game to facilitate moving and storing the crates built for these games.

These are early layouts of the game before much of the wiring had been done. 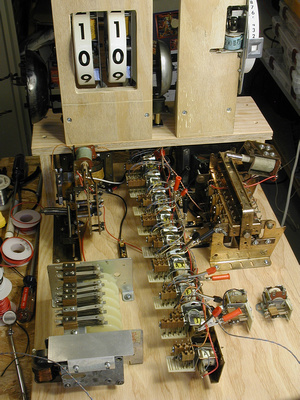 Early in the assembly phase 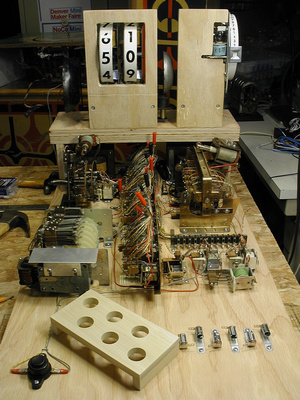 Although the idea of using a lexan sheet for the Man Running Unit was there before a Unit was even available, the details of how exactly it would sit above the rest of the game took a while to resolve.  Here the original Unit is resting on egg cartons and scrap wood to determine at what level it should be installed.

Once the correct height for the Man Running Unit was set, a removable, collapsible frame was built for it.  The frame and other major pieces of the game are all removable, again for ease of moving and storing.  These games are all too heavy, cumbersome and delicate to move from show to show without first disassembling and crating them. 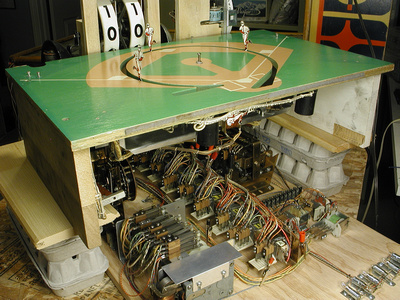 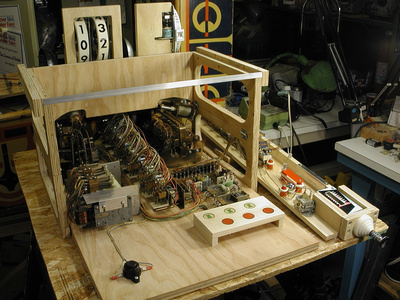 Once the layout was set, the long process of wiring the game began.  For this game each relay and each switch stack on the score motor was pre-populated with the required number of switches of the appropriate type.  Switches can be either normally open (NO), normally closed (NC) or make/break (MB) (also known as single-pole double-throw).  This game was complicated enough that there would be little room for unused switches, nor room to add switches that had been overlooked.  Getting the (mostly) correct switch configuration before wiring began saved a lot of headaches.  As each wire was soldered into place, its colors were noted on the schematic to make subsequent debugging and wire tracing easier.

Large alligator clips and twist ties were used to keep the wires in bundles and made it easy to add the cable lacing once the wiring was done.  A little slack was left in the relay wiring because each relay on the long center bracket is removable for servicing and adjustment.  Most of the cloth covered wire and cable lacing was reclaimed from retired games.  The wire bundling and lacing arrangement is representative of the style used in the original pinball machines these parts came from. 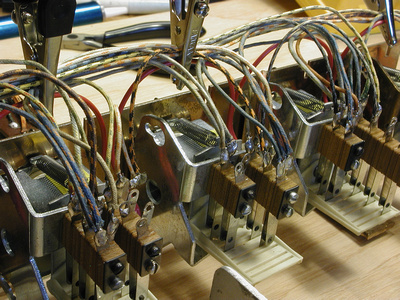 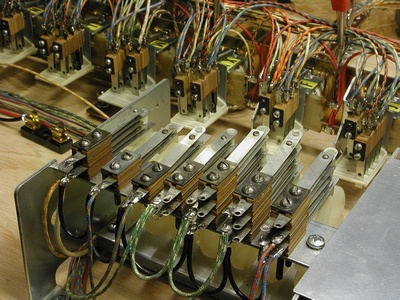 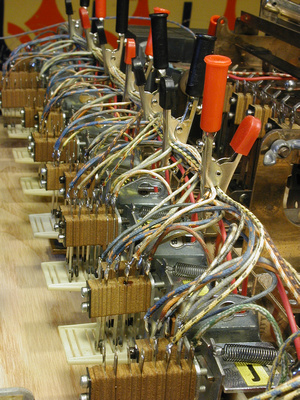 Relays mounted to the long bracket in the center are removable

The removable back deck of the game holds the score reels, balls to play counter, bells and knocker and connects to the rest of the game with a twelve pin jones plug that's not yet wired in this photo.  The large resistors below the score reels drop the voltage to the large bell in an attempt to dampen its sound which probably sounded great when enclosed in a cabinet, but can be piercing when out in the open. 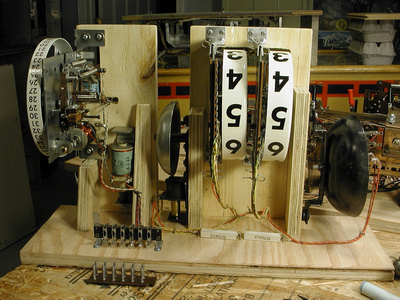 The ball holding area of the plunger lane took a long while to perfect as mentioned earlier.  What works well for a ball moving at one speed may fall down entirely when the ball moves a little faster or slower or comes in at a different angle.  This whole thing would have been a lot easier to do with a disappearing post, but that just didn't fit into this design. 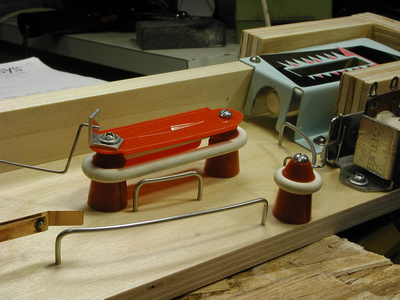 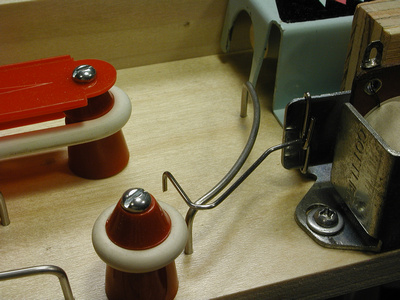 A relay reconfigured to hold back the ball

The plunger lane came together relatively easily once the details of the roll under gate were sorted out.  Piano wire was used for the gates because it holds it shape well.  It's hardened steel though which makes it really hard to work with. 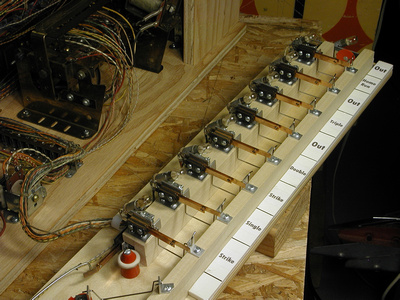 The plunger lane, propped up on a scrap 2x4 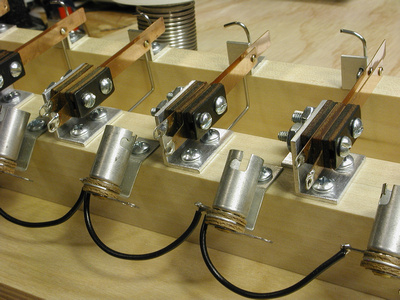 Since the plunger lane is removable it has it's own connector, or jones plug, to tie in to the main game board.  Each pin is just a hollow tube filled with solder to hold the wire in place. 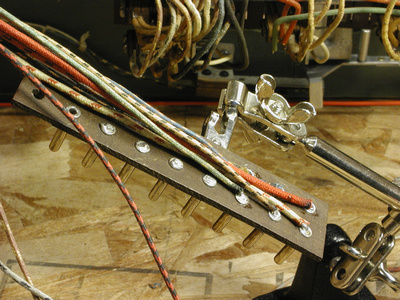 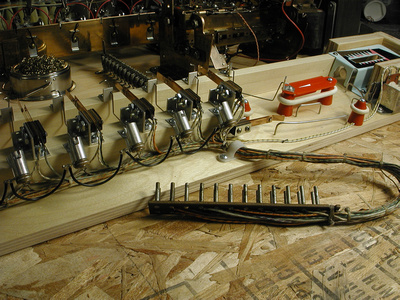 Lexan is another material that can be hard to work with when using only garden variety tools.  Cutting the slot with a table mounted jig saw and a plastic cutting blade was a little nerve-racking, but sanding the cut afterwards by hand was tedious. 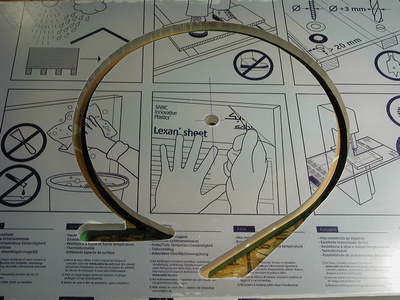 Comparing the lexan playfield to the original

Once the slot and center hole were cut the mounting holes for the Man Running Unit were transferred using a template from the original playfield. Then the unit was carefully mounted to the bottom of the lexan. 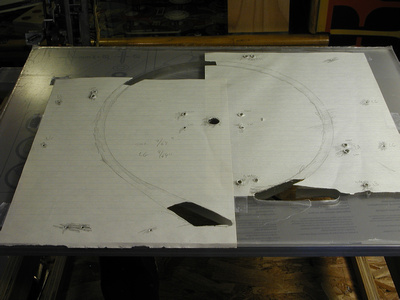 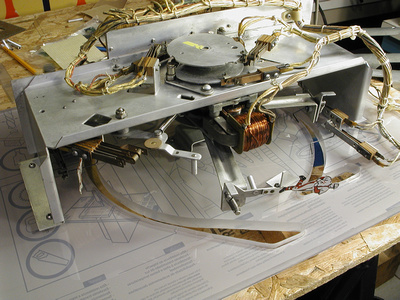 Aligning the Running Man Unit to the lexan

Transferring the lines from the original playfield to the lexan was done with a stencil made from a scan of the original.  First the corners were painted by hand, then frisket film and straight edges were used for the rest.  It may have been nice to transfer all the details of the original to the lexan, but the intention was to highlight the mechanics and not the artwork so just the bases and base lines were transferred. 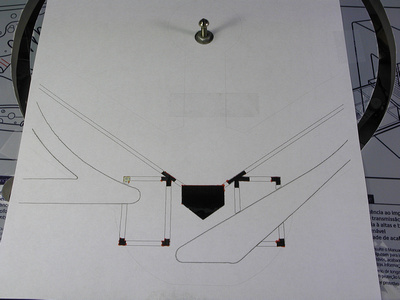 Transferring base line points to the lexan 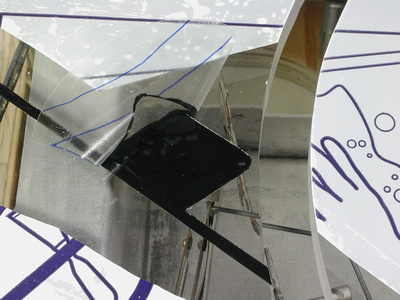 Peeling back frisket film from 3rd base 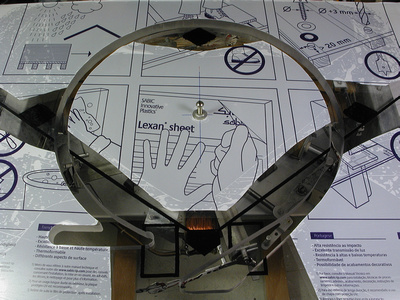 Bases and base lines done