As I mentioned in Part 1 I had the good fortune to meet a member of the technical staff for the Denver Center for the Performing Arts (DCPA) in the spring of 2018 at a public event where the full Fun With Pinball exhibit was on display. He mentioned that the DCPA would be doing a new production of The Who's Tommy in a few months. A couple of weeks later he contacted me to ask if I would be willing to help them with the electromechanical pinball machines they were using in the show.  He didn't have to ask twice!

The DCPA had acquired a pair of electromechanical pinball machines locally to use in their production of The Who's Tommy: a four player 1959 Gottlieb Sweet Sioux and a two player 1977 Gottlieb Solar City. Both games were in pretty good condition but had some issues that needed attention.  Since rehearsals had already started someone built a mock up of a pinball machine to be used in rehearsals while the real games were being repaired and automated. 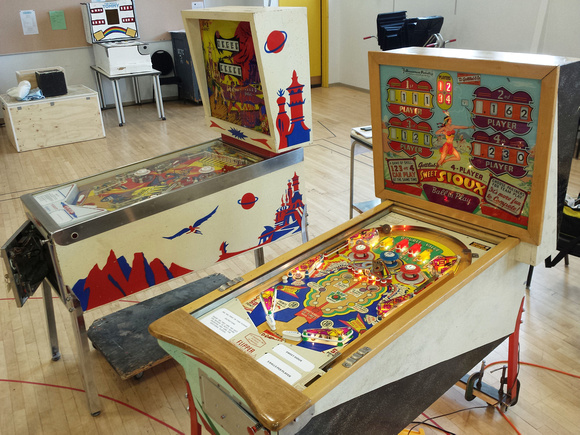 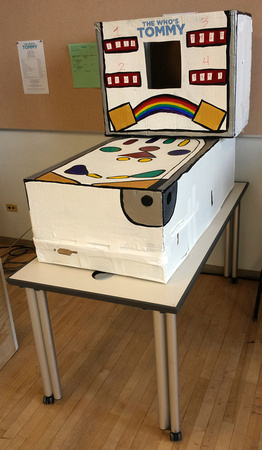 Before we could address the production's needs for the games they both needed to be a bit more reliable than they were.  Modifications were going to be made for the production so I wanted to be sure that both games were solid before making any changes.  Skipping that step would have made any troubleshooting of the modifications more complicated. So I spent a couple of afternoons going through the games, fixing minor problems and looking for vulnerabilities.  Sweet Sioux in particular had many hidden issues, mostly related to a known problem in the pinball collector community: bad solder joints. 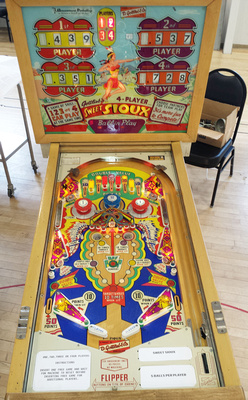 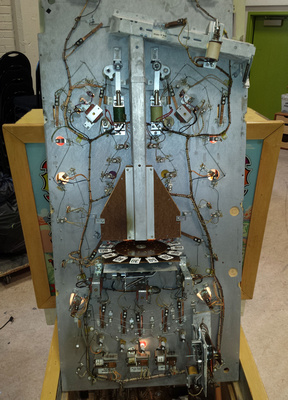 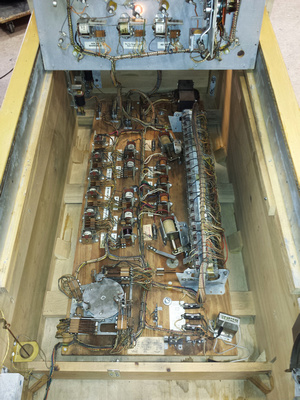 There must have been a batch of bad solder at some point in the factory because games of a certain era commonly have solder joints that pull away from their solder tabs intact because the solder didn't adhere well.  Over time mechanical vibration can partially or totally work these connections loose.  In obvious cases the wire falls off entirely, dangling near by with a solder impression of the matching tab as shown below. In more devious cases the joint works loose just enough to appear connected even though there is no reliable electrical connection.  Sweet Sioux had many of both varieties.  In the end most wires in the game were gently tugged to see if their solder connections were solid. 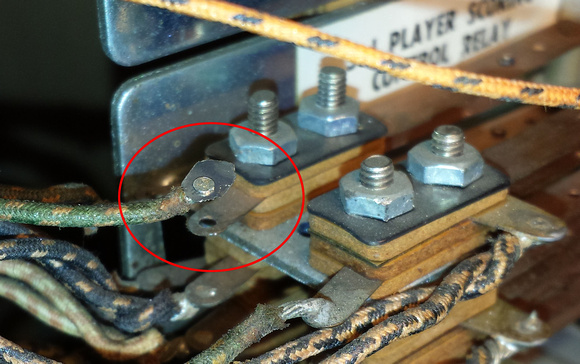 Bad solder jointSolder on the separated wire has the impression of the solder tab it was once attached to (just below).

Once both games were running reliably we turned our attention to the production needs.  This new production of The Who's Tommy would be highly automated.  Each of the individual lights, projectors, sounds, trap doors, rotating platforms, etc. was under computer control.  Sequences of changes to these devices were programmed in to separate cues to be activated by the stage manager during the show.  At the push of a button to start the next cue dozens of lights might change color or fade gradually while spotlights appear, sound effects go off and a trap door opens revealing something rising on the elevator from below.  There were hundreds of cues in the show that choreographed events on thousands of channels controlling individual devices from industrial sized hydraulic pumps to individual LEDs.  This level of automation is necessary to make the show consistently repeatable from performance to performance.  At times during the show there were so many things happening simultaneously that it was a challenge to catch them all.

It was in this context that the pinball machines too would need to be automated. To simulate a working, playing pinball machine night after night there would be no pinball installed which would introduce too much variability. The actors would have control over the flippers so the flipper sound and action would coordinate with their pressing of the flipper buttons on the sides.  But the rest of the game would be entirely under the control of the preprogrammed cues to precisely dovetail with the rest of the programmed events.

The first step in automating the pinball machines was to make them operable without external power.  Both games used in the show were mounted on casters and were regularly moved around the stage and up and down through the trap doors, not during blackouts between scenes but as part of the action of the scene.  This required on board power in the form of a car battery and inverter.  These were installed with a switch to allow the game to be battery operated during the show, but plugged in whenever it was being worked on. 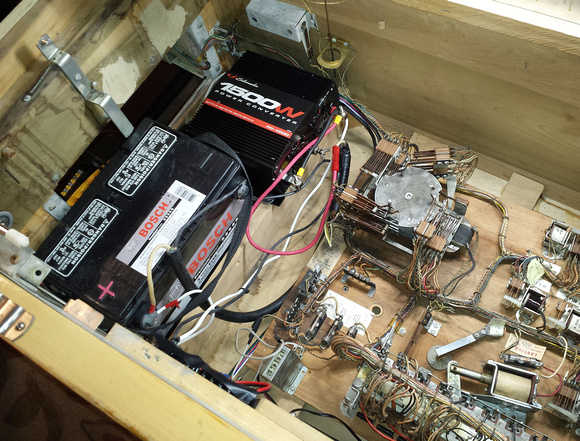 Battery and inverter inside the cabinet

The next step was to go through the basic features of each game and identify the features that would be both compelling and reasonable to automate.  Events like starting a new game, firing pop bumpers, adding points in different quantities, ringing bells and chimes, advancing score reels and turning various sets of playfield and backbox lights on and off were selected for each game to be made available for programming into various cues.

Radio controlled relays were used to link the selected pinball machine events to the production console.  Small, four channel radio receivers were placed inside each game that would receive commands from the main console.  The receivers would in turn activate their relays inside the pinball machine as instructed by the programmed sequence.  One of the many exhilarating moments for me on this project was the first time I watched the Lighting Director test the individual game features backstage from his phone. 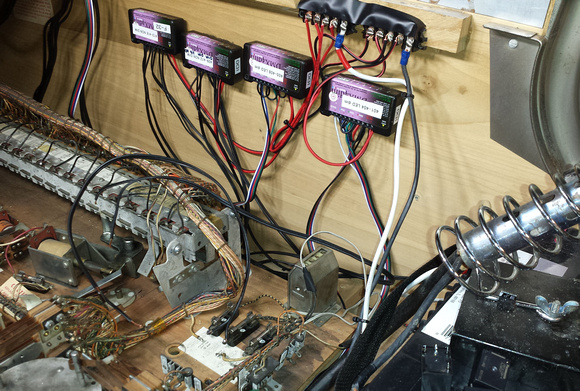 Radio receiversreceive commands from the console and drive relays and lights in the pinball machine.

My job was to identify where in the game's circuitry the relays should go using the schematic diagrams.  In most cases relays were added in addition to, or in place of existing switches in the game.  So where a ball hitting a target would close a switch to award 10 points in a normal game, a radio controlled relay might be added in parallel with the switch so that a command from the booth could effectively close the same switch. 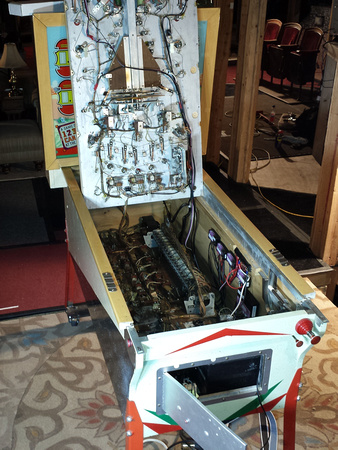 Added relay wiringfrom the receivers on the side of the cabinet to the relays under the playfield. 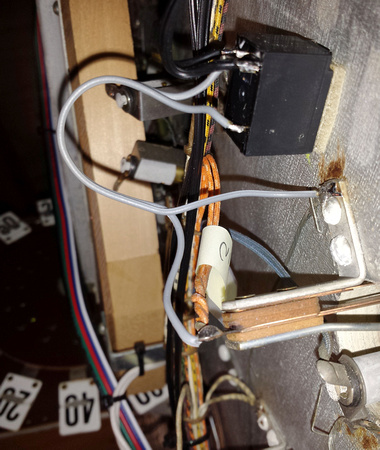 Other, less obvious changes were made to disable the tilt mechanism for example or to disable high impulse current events which otherwise would occasionally overwhelm and lock up the inverter.  In these and other modifications care was taken to document the changes and to make them reversible so the game could ultimately be restored to its normal working condition once the production ended.

The existing and added game lights were also automated using devices that could deliver variable voltages.  This enabled lighting effects that weren't otherwise possible like fading in or out for example. 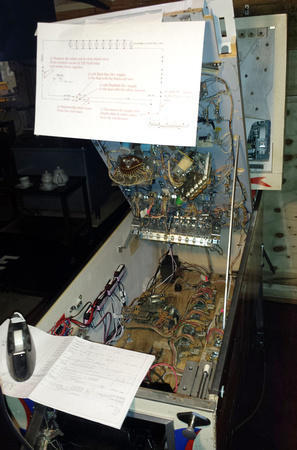 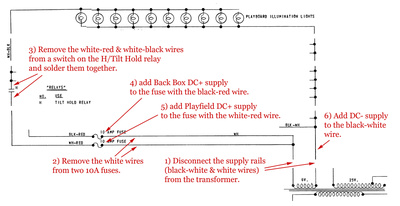 LED strips and small spotlights were also added to the playfield through existing holes to provide additional lighting effects and to illuminate the actor playing the game, all under program control. 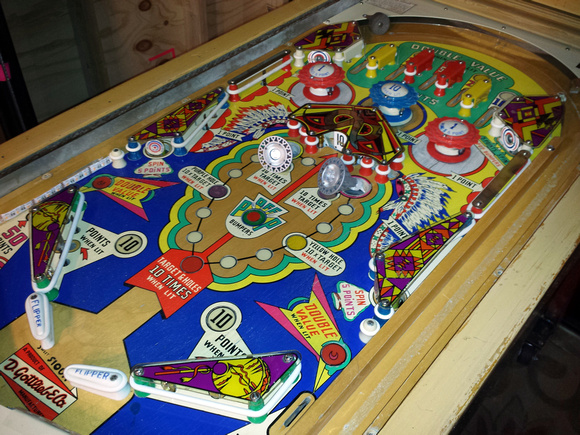 I'd like to thank everyone at the DCPA for including me in this project and for using real, working electromechanical pinball machines in their production of The Who's Tommy.  I applaud them for incorporating and animating games from the era of the story and for making only temporary changes to them.  Well done.

Find out what happened to these games after the show in Part 3.